Khartoum – At least 100 people are reported to have died so far in a crackdown by the Sudanese military on civilian protesters at the start of the week.

Initially, media reports had put the death toll at about 60 people after military personnel stormed a sit-in site outside its headquarters where civilians had camped demanding immediate transition of power from the military to civilians.

Witnesses said the crackdown in Khartoum saw civilians shot at and others brutally battered by the paramilitary Rapid Support Forces (RSF).

Others have been telling the press that the military raided the sit-in site and confiscated mobile phones, supposedly to prevent documentation of the attack.

More than 500 people were wounded.

On Wednesday, CNN quoted the Central Committee of Sudan Doctors (CCSD) as having said 40 more bodies had since Monday been pulled from the River Nile by RSF and taken to an unknown location.

CCSD said the number of those killed was at least 108 but warned that it was likely to rise.

The head of Sudan’s ruling military council, Lt. Gen. Abdel Fattah al-Burha has apologized to Sudanese people and said that “all involved in the events that lead to the disruption of the protests site will be held accountable and brought to justice.”

However, the protest leaders have “totally” rejected the military’s offer for an unconditional resumption of talks.

It should be recalled that after Monday’s crackdown, the military council had immediately cancelled all agreements it had reached with the opposition.

But Gen Abdel Fattah said on Wednesday said the military was ready to resume negotiations and that there would be “no restrictions” in talks with the leaders behind the months-long street protests.

Khartoum remained tense on Wednesday, with demonstrators blocking streets in several districts. Gunfire could be heard in the distance.

This coincided with Eid al-Fitr, which should have been a celebration marking the end of the month of Ramadan when Muslims fast.

Some protesters say that RSF personnel maintain presence on the streets in the capital Khartoum and that they been looting and beating people. The internet has been shut down in what observers say could be intended at preventing the people from sharing information on what’s going on in the country.

The RSF emerged out of the Janjaweed militias which rights groups accuse of committing war crimes – including killings, rapes and torture of civilians – in Sudan’s western region of Darfur after the outbreak of conflict there in 2003.

The paramilitary force was established in 2013 to fight armed rebel groups in Sudan. Mohamed Hamdan Dagalo also know Hemeti was appointed its commander.

The UK has closed its embassy in Sudan and advised all its nationals against traveling to the country.

The military council has launched a probe into the violence.

The military took over leadership of Sudan in April after the long serving President, Omar al-Bashir was deposed.

What started as a united call by citizens against a struggling economy, later became a demand for freedom, peace justice and an end to a regime that Bashir has presided over for the last three decades. 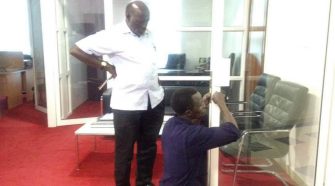