For the fifth time now, Ugandan athlete, Shida Leni has broken the national record in the women’s 400m race.

This is the 5th time she has broken the national record, having broken it on 4 occasions last year.

Shida has been trained for almost 6 years by the husband and wife coaching team of Kevin and Sue O’Connor.

While commenting on Lida’s latest record, Kevin O’Connor said: “This was another tremendous performance by this determined and dedicated athlete. Given she ran the last half of the race alone, she will undoubtedly go faster when she competes against runners who are of a similar standard or better than herself”.

“The big challenge for her now is to improve to 51.80 sec, which is the qualifying time for next September’s IAAF World Championships in Doha,” he added.

“A major reason for her improvement has been weight-training at the Espace Gym, Silver Springs Hotel. She is tall and slender, but now also immensely strong.”

“For Sue and myself, it is an honour and privilege to coach this talented athlete.”

The 24-year-old Arua born athlete represented Uganda at the 2014 Commonwealth Games in Glasgow reaching the semifinals, as well as the 2018 Commonwealth games in Gold Coast where she finished in 8th place in the 4 X 400m relay.

She has taken part in several other continental and world competitions. 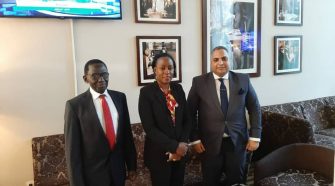