Government has come out to clarify on misrepresentations carried in the mainstream and social media regarding the recently presented bills on electoral reforms.

In its ruling in the election petition by former Presidential aspirant, Amama Mbabazi against Yoweri Museveni and others, the Supreme Court outlined recommendations in electoral laws and provided a deadline for government to implement them.

However, when the Attorney General presented the Bills for first reading, some of the facts in the provisions were misrepresented.

Political actors within the opposition as well as civil society have since been faulting government for what they call “ridiculous” clauses and for “ignoring the recommendations of the Supreme Court”.

One of the contentious issue has been the claim that the proposed amendments will prohibit independent MPs from joining a political alliance. Many political pundits were quick to interpret the provision as intended to curtail opposition politician, Robert Kyagulanyi.

It was also reported that members of the armed forces (soldiers and the Police) will have to vote 5 days prior to the polling day for the general public.

However, the Attorney General has Tuesday said that none of these amendments is true. He said the proposed amendments were misrepresented either by those who intend to gain political mileage or those who did not read the bills in their entirety.

“Since the 25th of July when the Bills were tabled, there have been a number of misrepresentations on the contents of the bill arising from failure to read or to access the bill and or to comprehend the provisions of the bill,” said the Attorney General.

He also said it could have been due to deliberate attempts by individuals seeking political relevance.

“I have been hearing about early voting by soldiers and other security personnel, and prohibition of Independents members from forming alliance with registered political parties or organizations.”

“My son told me ‘Daddy, they say you are targeting Bobi Wine. But the provision is not there”.

Clause 6 of the Parliamentary Elections Amendment Act 2019 seeks to amend Secrion 84 of the principle Act by inserting a subsection.

“What you people are saying is a complete opposite of what we are saying. If Bobi Wine was here, he should have bought me beer. Because this is the very clause that supports him. He is an independent but is hobnobing with other political parties. And we are saying, you can do that”.

The AG says the amendment only regulates the relationship between the independent individual and the political organization within the ambit of the Constitution.

On the purported prohibition of cell phones and cameras at polling stations, Byaruhanga said this is not true.

He said it is okay to criticize what is contained in the Bills but not to maliciously concoct falsehoods.

“I have heard also that we didn’t address the Supreme Court recommendations. This is really laughable because this is untrue because they are contained in Clasuses 1, 7 and 13 of the Presidential elections amendment Bill 2019 and Clause 2 of the Electoral Commission amendment Bill”.

On “restricting the declaration of results to only five people”, the Attorney General instead says that Clause 4 (c) of the Parliamentary Elections amendment Bill.

The clause states that “verification that a ballot box is devoid of any contents before the commencement of polling should be witnessed by at least a minimum of 5 people registered to vote at a polling station”.

“We are saying there should be a minimum of 5 people or 10,000 if they are there. At the beginning of the polling not at the end,” Byaruhanga said.

“It is not fair to tell the people a different thing just for political mileage,” he said.

While it is true that the government did not provide adequate draft bills to Members of Parliament and the press, Byaruhanga said this should not have warranted falsifications.

Regarding the last minute presentation of the electoral reforms, the Attorney General said this does not matter since government beat the July 25 deadline that the Supreme Court had set fot the amendments to be introduced.

“Last minute isn’t criminal. What is the purpose of a deadline? My obligation was to meet the deadline and that’s what i did”. 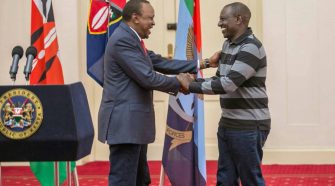