The former Bank of Uganda Executive Director for Bank Supervision, Justine Bagyenda has written to the Parliament Committee on Commissions, Statutory Authorities and State Enterprise (COSASE) maintaining that she will not be able to attend the sessions today.

Last Friday, Bagyenda failed to appear before the Committee and wrote to the Governor Bank of Uganda (BOU), Emmanuel Tumusiime Mutebile noting that she would not be able to appear since she was leaving the country to attend certain meetings.

She said the engagements had been scheduled prior to being summoned by the committee which is probing the manner in which BOU closed seven defunct banks.

The revelation by Bagyenda regarding her absence angered legislators who termed Bagyenda’s intention to sneak out of the country while aware that her presence in the committee was crucial, as contempt of Parliament.

Committee chairman, Abdul Katuntu subsequently adjourned the session on Friday last week and summoned Bagyenda to appear today, Tuesday, failure of which he said would prompt a warrant of arrest for Bagyenda.

However, through her lawyers of Kirunda Wesige & Company Advocates, Bagyenda has this morning written to committee insisting that she will not be able to appear before the committee. She requested that she be allowed 10 days after the summit she is currently attending.

Bagyenda noted in the letter delivered by Counsel, Robert Kirunda that she is away in the U.S attending to the International Trauma Summit organised by the World Federation of Mental Health which runs from November 27th to 30th in Texas.

She went ahead to note that in her earlier letter from the Governor requesting her to appear before the committee, she was asked to attend for just one day. She adds that she was never aware that the probe would take much of her time yet she had made more commitments and certain engagements.

On Tuesday, MPs on the committee requested that Katuntu exercises the committee powers to immediately issue her a warrant of arrest.

“Chair, the issue of 10 days will not apply if we are serious. We are also reliably informed that Bagyenda is currently in Nairobi and not in the U.S as she states in her letter,” noted Kasilo County MP, Elijah Okupa.

Buhweju County MP, Francis Mwijukye termed the act by Bagyenda as a contempt of Parliament, demanding that the committee involves Interpol to arrest her from wherever she is.

However, in his ruling, Katuntu noted that he would be hesitant to invoke his powers to issue a warrant of arrest, choosing to rather extend Bagyenda’s summons.

“I would be hesitant to evoke the powers of this committee and when I do, I do it for a purpose. I extend the summons to Thursday this week and if she fails to appear, a warrant of arrest is automatically issued,” Katuntu ruled.

Katuntu as well asked Police to ascertain the current location of Bagyenda, given the conflicting statements from members that she could be in Nairobi. 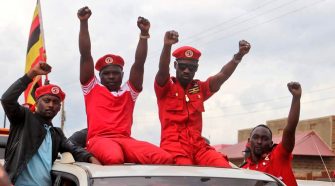