The Former Bank of Uganda (BOU) Executive Director Bank Supervision, Justine Bagyenda has denied allegations that she stole the bank documentations with the help of her driver and body guard.

It is alleged that on February 11, 2018, Bagyenda’s aides Juliet Adikolet and Dan Turyahabwe under her orders sneaked out confidential documents from bank of Uganda without going through proper security checkups.

In November last year, Adikolet and Turyahabwe who are suspected to have been complicit in the smuggling of the documents were handed over to Police for due investigations.

On appearing before COSASE during Wednesday’s proceedings, Bagyenda was tasked by the Chairperson of the Parliamentary COSASE comiittee, Abdu Katuntu, to explain why she carried bags out of the bank without going through security checkups, contrary to the Bank rules and regulations. Katuntu further asked Bagyenda to reveal what was carried in the said bags.

Bagyenda at first requested that she makes no comment on the matter in the absence of her former bosses.

“I am requesting that since this happened the way you are telling me, it was an administrative matter, I request that we request the governor, Deputy Governor, Executive Director Administration, Director Security, Director HR, Security consultant and the Personal Assistant to the Governor to be in the meeting,” Bagyenda requested.

However the request was declined by Katuntu who told her that he runs the meeting according to his own terms and ordered her proceed and respond to the questions.

Bagyenda agreed that indeed bags and box were carried out of the bank premises, but requested that she be allowed time to review the CCTV footage so as to give a proper response.

This was again declined by the COSASE Chairperson who insisted that Bagyenda reveals which documents she carried out and why they didn’t go through security checks.

“The bags had my personal documents, I had MBA books, Plaques, pictures, materials which I got from all conferences since I used to use them as reference materials in the different consultancies with IMF and World Bank,” Bagyenda explained.

She added, “There were also files for the Financial Intelligence Authority (FIA) where I was also a Board member, file for Microfinance Support Centre where I was a Board member for six years as a Chairperson”.
Katuntu however asked her to explain whether she sought for permission from relevant security or administration department to carry out her documents.

To this, Bagyenda responded requesting that she be allowed time to read through the security manual and as ascertain whether it requires one to seek permission before carrying out her personal documents and files. She said that the practice was that one is only checked.

She was however referred to a mail that was written to her by the Director Security Department, Milton Orech Opio reminding her that all clients, and staff must go through security screening and must be subjected to the search by security officer and that any bleach would subject the victim to disciplinary action.

Katuntu then asked Bagyenda whether it was her bleach of security guidelines that prompted Orech to email her on the allegations, which she denied.

Bagyenda insisted that she first be allowed time to go through the footage.

The committee will resume the matter on Thursday after allowing Bagyenda time to go through the footage for a proper response. 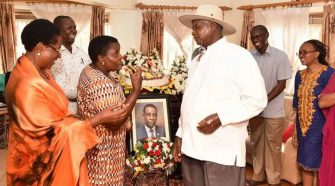