Events Manager, Barugahara Balaam Ateenyi has Tuesday shocked the nation when he stated that he has never registered ‘People Power’ as an Non-Government Organisation (NGO).

As if that is not enough, he wants a compensation of one billion shillings from a one Andrew Mukasa alias Bajjo Events whom he accuses of posting and spreading this ‘rumour’ first.

On Monday, Bajjo Events posted on his Facebook page that he had “first hand information” that Balaam had sometime back registered ‘People People’, a clock and Red Colour, all attributed to the pressure group of opposition Kyadondo East lawmaker, Robert Kyagulanyi Ssentamu alias Bobi Wine.

Balaam, would later on Monday appear on local Television, BBS Telefayina, and say that there are clear procedures provided by the Supreme law, to register any name.

“The constitution of Uganda of 1995 gives anyone a right to register any name of a company as long as it is not gazetted. There are stages that one has to go through to register a company name,” he said.

“I could not register FDC or NRM-O because they are already registered. No one can stop me from registering it,” he added.

However, in a turn of events, through Muwema and Company Advocates, Balaam on Tuesday issued a notice of intention to sue, saying the post by Bajjo events fueled the “hate campaign” against him.

“The above allegations are not only false but have also provoked hate campaign on social media laden with abuse and insults against our client,” reads the notice from Muwema and Company Advocates.

“For the record, our client has never registered the words or name “People Power” and he has no intentions of registering those words or at all,” the notice adds.

They claim that Bajjo abused his freedom of expression by engaging in acts of offensive communication and cyber harassment which is contrary to Section 24 and 25 of the Computer Misuse Act.

To the effect, the lawyers say they had instructions to compel Bajjo Events to retract the said false post from Facebook henceforth, on top of a publicly apology to Balaam using his own Facebook page.

Lawyers “that you (Bajjo Events) pay our client within 5 days damages now estimated at Shs 1 billion for the offensive data publication together with Shs 50 million being our legal fees.”

By the time of publication, Bajjo had in another another Facebook post acknowledged seeing the notice. He however said he is not ready to retract any statement he made, adding that he us ready to face anything including death.

He said that the people with whom Balaam is working have subdued to pressure and decided to backtrack on their intentions. 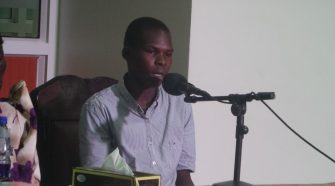