The reggae, Afro Pop singer announced this on Wednesday at a news conference held in Kololo, Kampala.

Bebe Cool said he intends to purchase state-of-the-art equipment that will form components of two audio production studio and one visual studio in a bid to position the music industry in Uganda to become competitive on the continent and globally.

“We need to fight towards qualify production and above all selling Uganda on a good note. The world needs to know us for the good and not for the orchestrated social media propaganda,” the singer said.

He said that he felt it was necesary to invest his income in the industry rather than focus on making profit. It is in the same spirit that he has always supported charity, particularly supporting sick children as well as education.

The studios are set for launch between January and February 2019, according to Bebe Cool. He said it will target to serve the most talented and deserving artistes.

The production facility will have four in-house producers working for 24/7.

At the same news conference, the ‘Love You Everyday’ singer also announced his upcoming annual concert ‘Tondeka Ekiwatule’ which takes place in the festive season. This will be the first time Bebe Cool is performing on stage since his embarrassing incident in August in Lugogo when he was forced off the stage by angry revellers.

Proceeds from the December 26 concert will go towards payment of school fees for some of the most needy children.

Asked if he is not worried about a likely reoccurrence of the nasty incident in August, Bebe Cool said security will take care of those that intend to exhibit violent conduct.

“I am not worried about a few lost people who think violence can help them at Kiwatule. We have security personale ready to arrest those attempting to disrupt the concert,” Bebe Cool said.

Bebe Cool described those that attempted to fight him as a mere clique of people who simply don’t want to see him progress.

“They have their beliefs and if they do not belief in my acts, then that’s my life. I know I am a civilised man, that’s why i never fought back but focused on silencing the majority with deeds”.

On Monday, upon his return to the country after a three-month long trip abroad where he also received an AFRIMA Award for Best Male Artiste – East Africa, Bebe Cool revealed that he intends to sign eight musicians under Gagamel. 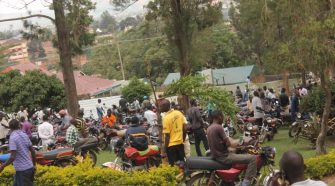