Opposition politicians have come out to mourn the sudden death of Barbara Allimadi, who was the Secretary for International Affairs in the Alliance for National Transformation (ANT) political party.

Dr Kizza Besigye said Barbara has been an impactful and a fearless frontline activist of the ongoing liberation struggle in Uganda.

The news of Allimadi’s death emerged on Monday with reports that she was discovered dead at her residence.

Police said in a statement that it is investigating her sudden death.

“It’s alleged that Wakibra Harry reported the discovery of a life less body of one Alimadi Ann Babra, aged 48 years, Coordinator of Alliance for National Transformation, Foreign Envoy and a resident of Kiwatule, ” the Spokesperson for Kampala Metropolitan Police, SP Patrick Onyango said.

She lived alone in her own house, according to preliminary findings by Police.

The finding further indicate that the deceased was found lying straight on her stomach with straight legs. The lying body shows she could have been in pain during her last breathe. There is no sign of struggle or injuries on the body.

Reacting to the news, four-time Presidential candidate and former FDC President, Dr Kizza Besigye said Barbara has been an impactful and a fearless frontline activist of the ongoing liberation struggle in Uganda.

“Her sudden (& still inexplicable) demise is as shocking & painful as it’s debilitating. Heartfelt condolences to family & friends,” he said.

“It with with deep shock and profound grief that I have learnt of the untimely passing of our dear sister in the struggle, Barbara Allimadi. There are many things we shall say about her in the coming days, but in brief, Barbara has been a freedom fighter- a true comrade in the struggle for freedom and democracy in Uganda”

Bobi Wine extended condolences to Barbra’s family and to Gen. Mugisha Muntu and the Alliance for National Transformation (ANT) Party where she served as Secretary for International Affairs.

On his part, Democratic Party President, Norbert Mao equally said he was saddened by the loss of Barbara.

“It hit us like a thunderbolt. I send sincere condolences to her family and also Mugisha Muntu for a loss so colossal. The sudden loss of a person we knew, appreciated & admired is hard to accept. But we know she rests in the arms of our Lord,” Mao said. 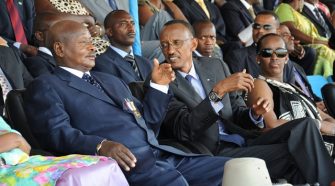