Four-time Presidential candidate and former FDC President, Dr. Kizza Besigye has revealed that he is ready to step aside and allow space to the youthful MP, Robert Kyagulanyi alias Bobi Wine to run for Presidency as the main challenger to incumbent President Yoweri Museveni.

Besigye made the revelation on Tuesday during the last campaign rally in the Jinja East by-elections where he campaigned for the FDC’s candidate, Paul Mwiru.

The campaign saw a number of opposition big wigs show up for the campaign who among others included; Gen Mugisha Muntu, Bobi Wine, Patrick Amuriat Oboi among others.

When given the opportunity to address the masses, Besigye said that he understands that people have heard enough from him and it is time to allow the young generation to take the lead.

“You have heard alot from me but now it is my brother Bobi Wine who is in the lead; the change will come from Kyadondo,” Besigye said.

Commenting on Besigye’s remarks, Bobi Wine who is not aligned to any political party said that receiving such commendation from Besigye who is his ‘god-father’ is so humbling.

The self proclaimed ‘Ghetto President’ shot to political stardom last year when he contested for a Parliament seat during a by-election in what some termed as the biggest political campaign of 2017.

Since the 35-year-old musician joined politics, many have speculated that he harbors Presidential ambitions. Some have viewed his nationwide tours ever since he became MP as a calculated political strategy to assess his popularity in different parts of Uganda. However, some say it is too early for Bobi Wine to take a shot at the top job given his lack of experience in political administration.

Whenever Bobi Wine who brands himself as a leader as opposed to politician has been asked about plans to run for President, he has only responded saying he can only cross that bridge when he gets there. 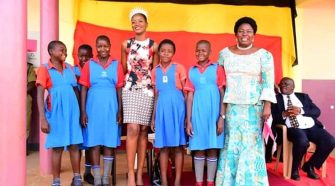