Opposition politician, Dr Kizza Besigye was Monday night released from Police custody with no charges preferred against him, Police says.

Besigye, a four-time Presidential candidate, was arrested while proceeding to Namboole stadium where FDC had planned a meeting. His convoy was intercepted in Kireka, near Namboole and Police used tear gas to disperse FDC supporters.

Police would later in the statement say that Besigye was arrested for defying Police orders when he parked his vehicle in the road, disrupting traffic flow.

He was thereafter driven to Naggalama Police station.

Reports in the media were by Tuesday morning been reporting that Besigye had slept in custody but Police spokesperson, CP Fred Enanga commented to the contrary.

Asked which charges the politician and former FDC President was arrested for, the Police spokesperson said: “It was more of a preventive measure until the threats of violence and defiance are reduced.”

Besigye tweeted Tuesday morning confirming he had been freed late Monday. He said he is generally fine but rallied Ugandans to unite in bringing an end to the impunity by the Museveni government which he says has gone on “for too long”.

I was released from Naggalama Police cells at about 10pm last night. By God’s Grace, I am generally fine. Am grateful for the many msgs of concern &prayers.
Gross abuse of Human Rights (by NRM/M7 junta) with impunity has gone on for too long.
We must all unite in saying: ENOUGH! pic.twitter.com/VPMQSr0KKc

Meanwhile, another opposition politician, Robert Kyagulanyi Ssentamu alias Bobi Wine who also doubles as Kyadondo East legislator, has come out to condemn the manner in which Besigye was arrested.

During the arrest, Besigye’s car window was smashed by police who used water cannon to spray water on him and tear gas to disperse the crowds.

Bobi wine says the manner was cruel and unacceptable.

“I want to condemn this very savage and cruel treatment of political leaders by those who are supposed to keep law and order. This is totally unacceptable,” Wine says in a Facebook post.

“As we stand in solidarity with our brothers and sisters in the struggle, I call upon all Ugandans to join the struggle for dignity and freedom for all Ugandans. We are reaching out to our comrades to see how we can jointly resist this kind of impunity. Completely unacceptable,” he adds.

A video captured from inside Besigye’s car during Monday’s incident has been making rounds on social media, attracting public criticism towards the Police. In the video, a Police officer is seen smashing the windscreen (in front of the passenger seat) using a lead of a gun.

Later, another Police officer is seen passing his arm through the window where Besigye is seated, and spraying him with what appears to be pepper spray. 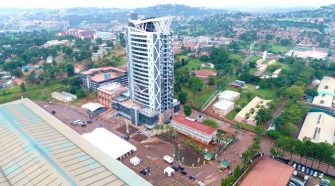