Besigye’s faction say they will not allow Police to violate the constitution whose Article 27 prohibits unlawful search or entry of private premises, or interference in the privacy of homes.

“Article 27 of the Constitution considers a home to be sacrosanct. It should be respected. If you are to respect one’s dignity, you must respect their home. But Enanga wakes up to make orders without even referring to the Constitution. A lot of blood was shed in drafting our Constitution, therefore it shouldn’t be taken for granted,” Erias Lukwago who is the Deputy President of ‘People’s Government’ told reporters on Wednesday.

Lukwago together with other leaders in the ‘People’s Government’ including Betty Nambooze, Wafula Oguttu and Ingrid Turinawe were addressing a news conference on the current political situation in the country.

On Monday this week, Police spokesperson, CP Fred Enaga said Police would inform its commanders to work with only those political actors who keep their activities within the law.

“All those who don’t keep their activities under the law, you are aware we are granted powers and discretion in policing assemblies and public meetings,” he said.

Enanga added that meetings in private homes will not be allowed since these homes don’t possess enough requirements to hold public gatherings and exposes the participants to danger.

“Even if it is your private home, once it is a matter of public interest when you have the public gathering in your home, it has to meet the provisions of the public order management Act”.

But Besigye’s team accuses Police and RDCs of usurping the powers of the Electoral Commission and hijacking the electoral process.

“Notifying Police about activities in a public space, is a requirement and we have no objection and we shall do that. But in a private place or person’s home, we wont. So, Police means to say if I am having a chat with my family members on political issues, I will have to give Police a notice?

That’s how they are bastardizing this country and insulting our intelligence. We must say no to this”.

Lukwago noted that “hopeless” as the Public Order Management law which Police regularly cites is, it does not grant Police the powers to allow certain meetings and not the others.

“It is an illegality. We call on all forces of change to team up and deal with the impunity. And right these transgressions and illegalities”.

Nambooze on her part termed as “absurd” the idea that Police seeks to be the grantor of permission to meetings and public gatherings even in people’s homes.

“Police only has regulatory not limiting powers. We shall continue with our activities and defy orders by Police. We shall go to people’s homes. On December 30, when our President, Dr Kizza Besigye addressed the nation, he said this year, if you push us, we shall push back,” Nambooze said.

Nambooze revealed that the ‘People’s Government’ will soon embark on nationwide consultations with the Ugandans as they finalize the process of filing their petition against President Museveni to the International Criminal Court (ICC).

On Monday, Police blocked a consultative meeting planned by opposition politician and Kyadondo East MP, Robert Kyagulanyi (Bobi Wine) in his constituency saying it had not met the requirements. Police said the venue was an open space yet the EC guidelines require that such meetings be held in an enclosed space.

Commenting on this, Lukwago cited Article 61 (f) of the Constitution which gives the EC, not Police, the mandate to entertain petitions arising from electoral processes.

“If you have any complaint, you register that complaint with the EC which schedules a hearing and summons that person. But not for Police to set the Dos and Donts”.

He said it is illegal for the Electoral Body to abdicate its duties to the Police.

As such, Lukwago challenged Ugandans to make use of the powers provided to them under Article 3 clause 3 of the Constitution to do whatever is in their power to resist persons seeking to overthrow the constitution.

“It’s an obligation that you stand up. The situation we are dealing with warrants standing up to the call in Article 3. Don’t leave it to individuals”.

Nambooze said the law is silent on how consultations should be executed, and therefore Police is wrong to dictate how politicians must conduct this process. 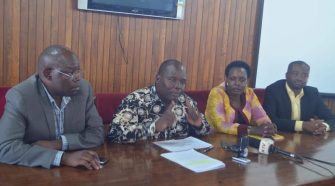