The Katikkiro of Buganda, Charles Peter Mayiga has said opposition politician, Robert Kyagulanyi (Bobi Wine) must do more than pulling crowds and the euphoria that he sparks among the young people, if he is to be considered to lead Uganda.

The Katikkiro said that as much as Bobi Wine, 37, appeals to the young generation, who are the majority population, he needs to come up with a well laid-out program on what he can do for Uganda.

Mayiga was speaking Wednesday while appearing on Straight Talk Africa, a talk show on Voice of America which is hosted by Shaka Ssali.

Asked what his views are about Bobi Wine, the Katikkiro said: “Well, Bobi Wine is a darling of young people and you must realize that the  current regime has been around for 33 years”.

“That’s a long time and Bobi Wine is an artiste, and to communicate to people through music is very easy”.

The Katikkiro was then asked to comment on whether he agrees with some people who say Bobi Wine’s future is way ahead of him. When talk regarding Bobi Wine being a potential candidate for Presidency, first emerged a section within the ruling NRM and the public dismissed him as not being fit to contest.

“I don’t know. It all depends on how he wraps up his program and presents it to the people. The French President is very young, there is a Chancellor in Austria who just resigned, he’s 32. He’s younger than Kyagulanyi. President Obama became President at 47. President Kennedy was 43,” Katikkiro said.

“What matters is whether he (Bobi Wine) has readied himself for the job. Beyond the euphoria of the youths. If he wants to be President, then he must have a program beyond the crowds,” he added.

On whether Bobi Wine can count on the support of Mengo, the Katikkiro said Buganda kingdom supports whoever is aligned with the kingdom’s interests.

He said that any Presidential candidate seeking the support of Mengo “should come over and tell us they are going to support us” on the five issues.

“You respect our heritage and King, we want the federal system of government, we want to protect our land and borders, we want programs for social economic development, and we want the unity of the people, ” he said in outlining the key pillars commonly known as “ensonga ssemasonga ettano”.

“Whoever supports them, then people should vote him,” Mayiga said.

There have been claims pointing to a likelihood of Bobi Wine who is a Muganda, being backed by the establishment in Mengo.

In February this year, in a CNN interview, Bobi Wine for the first time publicly said he was considering running against President Museveni in the 2021 general elections.

The singer launched his political bid in 2017 when he ran for a Parliamentary seat in a by-election in Kyadondo East constituency near the capital, Kampala.

Since then, the Afro Pop singer has mounted pressure on President Yoweri Museveni’s government, rallying his followers, many of them youths to use their numbers and power change leadership.

He would later coin his ‘People Power’ slogan under which he challenges Ugandans to put an end to a status quo he says only works for a few.

He was among the legislators that challenged the controversial amendments of the Constitution which repealed the Presidential age limit in 2017. 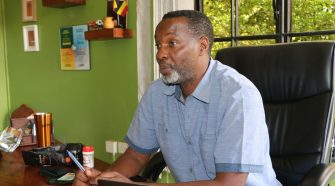 Understanding the Impact of Denial of S.African Visas to Uganda’s Tour Operators