Bishop Stuart University (BSU) in Mbarara district has strengthened its capacity in the field of agriculture to ensure the institution imparts modern skills in the students so they can innovate and create self-sustaining agro-businesses after completing school.

Unlike most universities in Uganda whose focus is mainly on theory, Bishop Stuart University is concentrating on hands-on skilling of students to start up something for themselves after the university.

She said agriculture is a cross cutting course at the university enabling students of other specialties gain agriculture skills to boost their economy after studies.

According to Dr Rebecca Kalibwani, the Head of Agriculture Department and Agribusiness, out of 4,699 students at the institution, 500 enroll in agriculture.

She however states that the number is still small since few students take science courses at A’level.

“We started with few students, way back in 2000, they were only four. But right now, we have about 500 students. The numbers are still low because not so many students take up science courses. We find that we tend to get few students registering for agriculture,” explained Kalibwani.

She added that the university is supported by experts from Netherlands to impart agricultural innovations to students.

“Why we were not succeeding at the university was lack of a well functioning farm, but since last year, we go support from AVSI Foundation from Netherlands and they are now establishing new structures like a diary shed, modernized poultry unit supporting students at the farm and a green house for vegetable growing,” said Kalibwani.

“We have a program called the agro studies program where our agriculture students go to Israel to do internship and over 200 students have so far benefited since its inception,” she said

Kalibwani says that two new programs started last year at the university to enable students’ acquire projects they can turn into business after studies.

“We started two new projects which started last year one being funded by AVIS Foundation based in Netherlands. They support the university to have structures at the farm and another being Agribusiness incubation herb (it is a project that supports and nurturing business ideas from the students to grow into enterprises)”.

She also confirmed that the university is registering a company to start selling natural agricultural Products in the country.

Kalibwani encouraged students to come up with business ideas to benefit in the project.

James Katumba, the Agribusiness Incubation Herb Manager and a pioneer student to the project told SoftPower News that he is venturing in herb yoghurt to benefit.

He says he does not regret why he took agriculture as a course because he is making a lot of money from yoghurt.

“Our herbal yoghurt is still incorporated within the university but we are targeting the world market”.

“Most yogurts on market, they just use flavors but for us, we extract juice from beetroot, aloivera and hibiscus in making it” said Katumba

He says the product intends to help vulnerable people in the community.

Katumba advised fellow youths to stop lamenting about the lack of employment and instead venture in hands-on courses.

“At the end of the course you are not only graduating with a degree but also with a project that can earn you money,” he said. 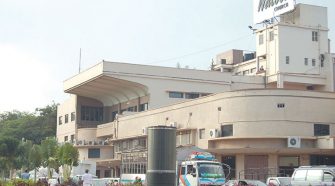