Kyadondo East MP, Robert Kyagulanyi Ssentamu alias Bobi Wine has Monday been arrested by security from Kingo road near his One Love Beach Busabala, and whisked to his home in Magere, Gayaza.

Police on Sunday cancelled a music concert which was scheduled to take place Monday (today) at the Beach on grounds that the organizers had failed to fulfill the set security requirements, prompting Wine to call for a press conference today at the same place.

But on Monday morning, heavy security deployment was seen at the routes to the beach, with event organisers Andrew Mukasa alias Bajjo events and Abbey Musinguzi alias Abitex said to have been arrested.

Towards midday, Bobi Wine who was driving towards the beach was blocked at Kingo road for a while, when they (Police) used teargas and shooting in the air to disperse crowds which were gathering to welcome the musician.

Minutes later, his car was towed for a few metres, but security officers forced themselves into the car and pulled him out before driving him off.

Earlier, there was some scuffle at some point between journalists and security officers as the latter attempted to block the press from capturing the events. 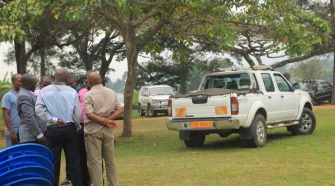