Clad in a back suit, red tie and light spectacles, Bobi Wine was addressing leaders from the Democratic Party, Social Development Party and Justice Forum who on Thursday gathered at Hotel Africana, to sign a memorandum of understanding aimed at working together ahead of the 2021 general elections.

“Of late, I have come to conclude that some members in the opposition are only concerned about their positions and they will fight any composition that threatens their positions. But, that is wrong, that is not how it is supposed to be ladies and gentlemen. Whatever we are saying here, we are not saying it on our behalf, no, we are saying it on behalf of those people. How can you say we are trying to elevate the powers of the people in the modern days, in the civilised world where people alert their powers through their vote, but we are busy discouraging our people from registering as voters,” he said.

It is not clear who Wine was exactly referring to, but some people suspect it could be Dr Kizza Besigye, the FDC four-time Presidential candidate, who is only record for saying that he (Bobi Wine) can not win President Museveni through a ballot.

“Uganda is a young country, we have that energy. I want you people to know that we are capable of causing chaos and violence, but we chose to despise violence because it does not work. That is not what Ssemwogerere taught us, that is not what Mugisha Muntu is teaching us, that is not what Mao has been saying, we believe in democracy and that democracy should not depend on us as politicians,” he added.

Bobi Wine said: “So, for a leader to say that a vote can never oust Museveni without offering another option, it is disappointing. We continue to call upon Ugandans like we have always said, what we politicians can not solve, the people of Uganda can solve. They should go ahead and register as voters and be many.”

While appearing on NBS Radio in Jinja recently, Besigye said “those who think they shall use national IDs to remove Museveni do not understand the man.”

But citing recent victory of opposition MPs in by-elections in Bugiri, Arua, Kyadondo, Rukungiri and Jinja East, Bobi Wine said the power of the people worked and will still deliver him victory in the presidential elections in 2021.

He however said that victory will only be achieved if people in the opposition convince the public that they believe in what they say.

“Don’t talk about democracy and stand four times and then on the fifth time you tell people that democracy doesn’t work. On that point, I want to assert that actually democracy works and anybody despising democracy, is despising the people of Uganda,” said Bobi Wine.

Kizza Besigye has so far run four times for Presidency against the incumbent, President Museveni. He has severally claimed the elections were rigged in favour of Museveni, though he (Besigye) was the rightful winner.

We have the numbers, we are calling upon the people and people are going to assert their voices and then we shall wait for anybody that messes with our voices, he added.

On opposition unity, the MP said efforts to unite are underway. He cautioned voters on the “self seekers” who only aim at “compromising them.”

He said people on the opposition should stop blaming their failures on President Museveni, saying they simply fail themselves and “if we choose to come together, no amount of Museveni’s money will divide us.”

Speaking at the same event, JEEMA President, Asuman Basalirwa pledged his readiness to cooperate the Democratic Party block saying whoever is against opposition unity is “immoral.”

On his part, the People’s Development Party President, Abed Bwanika, said opposition politicians do not need to like each other to work together on achieving a common goal.

In his speech, Muntu heaped praise on the organisation of the event, saying it is platform for working together and establish good governance in the country.

He said ANT believes in working together with other forces of change also pledging to be available in every effort by the groups aimed at ending “dictatorship” in the country. 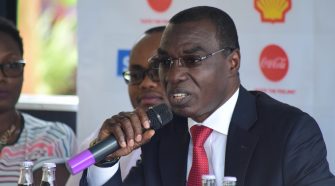