Medard Lubega Ssegona, one of the lawyers of the detained Kyadondo East lawmaker, Robert Kyagulanyi Ssentamu alias Bobi Wine, has said his client is now in a better health condition compared to days ago.

He was speaking to SoftPower News in an interview, after visiting Bobi Wine on Monday afternoon, together with other Members of the Parliamentary ad-hoc committee, Wine’s wife, Barbra Kyagulanyi and Uganda Human Rights Commission Chairperson, Meddie Kaggwa.

“It’s true we visited him and his situation is deplorable but at least better than the time he was in Gulu,” Mr Ssegona said.

He was however quick to say that the detained legislator still has severe pain in some of his body parts which need immediate help.

“He still has horrible pain in the hip and this is worrying us. It actually means that we cannot rule out the possibility of kidney problems as many have claimed,” he added.

He added that they still ask authorities to grant Mr Kyagulanyi access to proper medical attention from a facility of his own choice.

On his treatment, Mr Ssegona confirmed that Bobi Wine says, he has never been clobbered at the Makindye Military Barracks and he is treated well.

Bobi Wine a musician turned politician is currently held at Makindye Military Barracks on charges of illegal possession of firearms and ammunition.

He was arrested on Tuesday August 14, in Arua together with other 29 people, to help in investigations into the alleged pelting of stones onto President Yoweri Museveni’s convoy by MP Kassiano Wadri’s supporters.

He would later be charged in the Court Martial on August 17. He is expected in the same court again on Thursday August 23. 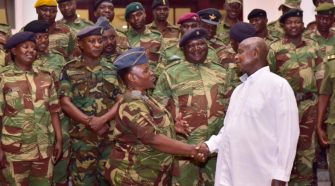