This follows reports that emerged on Saturday night that City hotel in Jinja where Bobi Wine and his colleagues were residing had been cordoned off by Police officers.

Security is said to have deployed at the hotel ahead of a music show where Bobi was scheduled to perform alongside other musicians including Pallaso.

The Afro pop star would later post on Facebook, that Police had arrested and beaten a number of his friends before escorting them to Lugazi allegedly on gun point. He said that security was as well searching for him but, he was seeking refuge in a secret place.

Now, his American lawyer, Robert Amsterdam has come out and described the act as a political witch-hunt by security, saying Bobi Wine did not commit any offence in attending a music show.

“This is a clear and brazen act of targeted political repression by the Uganda authorities aimed at violating Bobi Wine’s human rights,” said Amsterdam.

Bobi Wine, 36, who is a Member of Parliament representing Kyadondo East was in August arrested and allegedly tortured by security agencies in Arua district, attracting condemnation towards authorities in Uganda from international rights campaigners. In recent weeks, several of his music shows have been cancelled by Police for failure to fulfill the legal procedure, according to Police.

“Once again, Bobi Wine has broken no law, the concert was fully and legally permitted, and the other participating musicians were not targeted,” lawyer Amsterdam said.

He says that such acts are only intended to suppress people’s freedoms of assembly and association, before warning that the perpetrators are going to be documented and shall be held accountable at the right time.

“The use of violence and intimidation by the government of Uganda against peaceful, law-abiding citizens is carried out with the clear intention of repressing their rights to freedom of assembly and freedom of expression,” says Amsterdam.

“We are going to be vigorously documenting every unlawful act and violation of rights by members of the Police and their superiors, and will seek to hold them accountable before every available international forum. The highest authorities have an urgent responsibility to halt this deplorable persecution without delay,” he added.

“Earlier this year I met with @HEBobiWine after he was brutally beaten and detained by Ugandan security forces for speaking out against corruption. Today they have reportedly surrounded him and his team. The Ugandan govt must commit to the essential principle of freedom of speech,” Sherman tweeted on Saturday.

Another American Congresswoman, Karen Bass who represents California’s 37th district tweeted about Bobi Wine’s situation in Jinja on Saturday describing it as an abrogation of democracy.

“Stifling freedom of speech and expression and arbitrary arrests have no place in a democracy,” she said in a tweet.

Meanwhile, Bobi Wine’s whereabouts remain unknown and authorities have not yet come out on the issue. 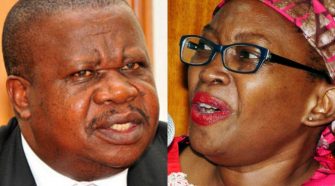