As traders in exports continue to count losses following the closure of the Uganda – Rwanda border at Katuna, opposition politician Robert Kyagulanyi alias Bobi Wine has added his voice to those calling for urgent interventions to resolve the strain.

Kyagulanyi, a legislator representing Kyadondo East says the current stalemate at the border undermines the progress towards regional integration within the East African Community.

For four days, the Uganda – Rwanda border post at Katuna has been closed to all trucks carrying cargo, by Rwanda’s Revenue Authority (RRA). Rwanda’s tax body said last week that the closure was intended to “allow construction of the One Stop Border Post at Katuna”.

Over 100 trucks registered in Uganda, Rwanda, Kenya and Burundi remain stuck at Katuna border, some carrying perishable goods and others highly inflammable products like petrol. Each day that passes, these traders and logistics companies are incurring losses for the time wasted which could have been used to make several other deliveries.

In a statement issued Monday, Kyagulanyi urged the principle actors both in Rwanda and Uganda “to stick to the diplomatic path for the benefit of the citizens of either country and the broader peace and prosperity of the Great Lakes Region and our continent Africa”.

He said there is a lot more that unites Ugandans and Rwandans, than what divides these peoples.

“Over the years, we have invested colossal amounts of resources into the regional integration process and the current tensions only serve to undermine and erode the economic and geopolitical gains made in the quest for integration,” the politician and singer said.

The business community which is a crucial component of development as an economic bloc is bearing the brunt of this impasse and has so far incurred combined losses upwards of fifteen million dollars in the past several days, he said.

He argued this will likely curtail the EAC’s opportunities of registering a trade surplus this financial year.

“Let us all give diplomacy a chance, de-escalate tensions and forge a lasting peace”.

Citing regional and international instruments and international protocols on trade as well as security to which both Uganda and Rwanda are signatories, Kyagulanyi said these instruments restrain the two countries from armed confrontation and encourages peaceful resolution of disagreements.

“Too many lives and livelihoods have been needlessly lost in previous flare-ups of war between our two countries”.

He appealed to the political leadership on both sides of the aisle to act in the interest of the future generations “whom we owe a duty of care to ensure that we leave them a better world than we found”.

“Our actions and statements have implications for millions of lives and so restraint should be a priority”. 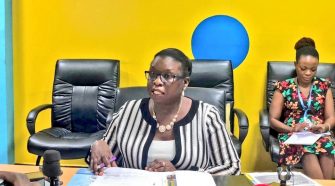