Singer Bobi Wine has said Fresh Kid is a reflection of his (Wine) own past and that he is willing to meet with the young rapper’s parents to share his experience so they learn from the mistakes he made while growing up.

The youngster who has quickly shot to popularity has recently become a subject of a debate after a Minister said he is too young to work (sing) and that he should concentrate on school.

Nakiwala Kiyingi, the State Minister for Youths and Children Affairs recently said that Fresh Kid was breaking the law, and threatened to jail the rapper. However, the Minister received strong criticism from the public as well as some MPs and artists who said government should be grooming such talent rather than suppress it.

Asked what he thinks of the star kid, Bobi Wine described Fresh Kid as a national treasure.

“That kid is very clever compared to many other children – when you listen to how he analyzes his stuff,” Bobi Wine said on Friday while talking to NBS TV.

It is astonishing that a child born in a rural setting such as Luwero and attaining conventional education can manage to become very intelligent, said the ‘Kyarenga’ singer.

He said Fresh Kid doesn’t need to be changed but rather to be polished to become a better musician.

“I started writing my songs at about the same age as Fresh Kid. I want to get a chance and discuss with his parents,” Bobi Wine said.

“I can help them shine a light into my life story so they can appreciate the mistakes I have made during my musical journey”.

The Afropop singer and self proclaimed ‘Ghetto President’ said his story as a child who grew up in the slums of Kamwokya is similar to that of Fresh Kid who was raised in a family of peasants. In his hit song ‘Bambi’ which is a plea directed to the Minister, Fresh Kid explains that his talent (singing) has made him bread winner of his family.

“I have been a ghetto kid who is talented. I wouldn’t want him to repeat the mistakes I did,” Bobi Wine said.

Whereas Bobi Wine supports the idea of protecting Fresh Kid from environments that could be harmful, he accuses government of overstepping its mandate and being pretentious.

“Six months ago, that boy could have slept on an empty stomach, or been in a bar and nobody would have cared. There are 3-year-olds who spend the entire night out with their moms as they work”.

Using a local adage, Bobi Wine said that anyone who pretends to love a child more than their (child’s) mother only seeks to eat the child. 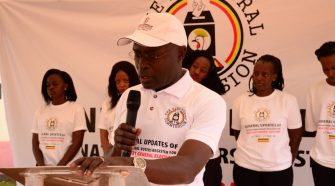