As Kyadondo East MP, Robert Kyagulanyi Ssentamu continues to reorganise his newly acquired political party, National Unity Platform (NUP), the President General of the Democratic Party, Nobert Mao, has revealed that he had an engagement with him and asked him to ‘immunize’ it against the ‘six killer diseases’.

Kyagulanyi on July 22 unveiled NUP as his political party ahead of next year’s general elections. He bought the party from a one Nkonge Kibalama who has been its leader since 2004 when it was started. It was known as National Unity, Reconciliation and Development Party (NURDP).

While addressing reporters in Kampala on Tuesday, Mao said the Democratic Party championed the return of multiparty democracy in Uganda and having another party joining the struggle for leadership makes them proud.

“We welcome the launch of the renewed party called NUP and I spoke to the new President, I congratulated him that we who are seasoned birth attendants would have been invited to attend the launch to watch the baby,” Mao said.

According to Mao, now that NUP has a new ‘mother’, it ought to be advised by leaders of a traditional political party like DP on how to survive in the current political atmosphere in the country.

Meanwhile, Kyagulanyi on Tuesday launched NUP membership cards at an event which took place at the party’s headquarters in Kamwokya which he said are to be issued to all individuals willing to join NUP at a cost of Shs 1,000. 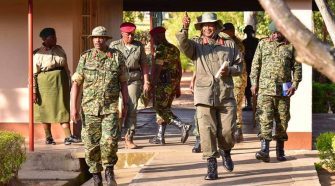