Mr Kyagulanyi, 36, was arrested by the military on Tuesday this week, to aid investigations on the violence in Arua which saw stones pelted on one of President Museveni’s convoy allegedly by supporters of MP elect for Arua municipality, Kassiano Wadri on Monday August 13.

Security agencies would later explain that during the search of Mr Kyagulanyi’s hotel room, he was found possessing arms and ammunition which are ordinarily a monopoly of the defence Forces.

He was on Thursday remanded until August 23 by the General Court Martial.

However, the protestors dropped stones and burnt car chairs at several points along Old Kira Road, demanding for the immediate and unconstitutional release of Mr Kyagulanyi.

It took the intervention of Kira Road Police under the command of DPC Michael Kasigire, who arrested a number of protesters and shooting in the air to disperse the crowd which was steadily turning rowdy.

Mr Kyagulanyi is a very popular figure in poorly developed Kamwokya popularly referred to as “Ghetto” by many youths where he grew up and recorded his music. He is a self proclaimed “Ghetto” President. 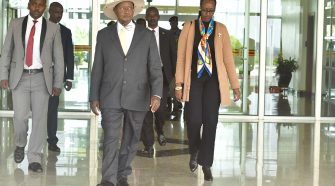 Museveni Heads to Russia for First Ever Russia-Africa Summit