Government through the First Deputy Prime Minister, Gen. Moses Ali has revealed that Bobi Wine will be arraigned before the Gulu Court Martial tomorrow to answer charges relating to possession of a gun.

Gen. Moses Ali told Parliament that the legislator was found in possession of a fire arm which deems him eligible to be tried by a military court.

Gen. Ali’s response came after the House was suspended for an hour following demand by legislators on a clear state and whereabouts of Bobi Wine and other legislators who were arrested in Arua.

“Hon. Kyagulanyi Ssentamu was flown to Gulu Military Hospital for medical care but he is now okay. He was found with a gun and will be arraigned before the general court martial in Gulu tomorrow,” Gen. Ali told MPs in Parliament.

On Wednesday, Bobi Wine’s wife, Barbie Kyagulanyi said that her husband does not know how to use a gun. She went on to question why Bobi Wine, a civilian would be held in a military barracks, as reported by one of the dailies.

The other four MPs including Gerald Karuhanga, Francis Zaake and Paul Mwiru will appear before the Chief Magistrate Court in Gulu on Thursday and their files are being processed by the Director of Public Prosecution (DPP).

Government puts the total number of those arrested at 33 and that they are all detained at Gulu Central Police station.

Regarding the allegations that the suspects were tortured, Gen Ali said; “The allegations of torture are not true, there is no torture at Central Police station cell, the RPC has taken care of their safety, they are accessible through their relatives and lawyers”.

Meanwhile, the Speaker of Parliament has tasked a 6 member committee of MPs to travel to Arua and establish the circumstances surrounding the arrest of the legislators. The team has been instructed to set off Wednesday night. 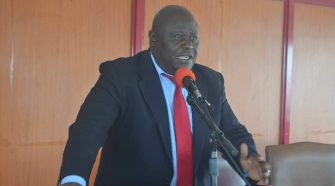