Party leaders, cadres and supporters of the ruling National Resistance Movement (NRM) in Western Uganda have rallied behind the move to have President Yoweri  Museveni as the sole candidate in the 2021 Presidential election.

The resolution was declared on Saturday during an event held at the Boma grounds in Mbarara municipality where a host of NRM supporters across the region converged. They dressed in yellow attire and held posters written on Museveni as their sole candidate.

Former UNATU chairman, James Tweheyo who is the Chairman of the NRM Workers’ League pointed that it the party only awaits the endorsement of Museveni by the National Executive Committee (NEC) of the NRM.

The President who is in his fifth term as President of Uganda has already been endorsed to run as the only candidate in the NRM by the Central Executive Committee (CEC) which is the highest decision making organ of the NRM as well as the NRM Parliamentary Caucus.

“We sat at Chobe Safari Lodge and moved that President Museveni remains as our party chairman. We shall call a National Executive Committee meeting to officially move the motion of Museveni being our sole candidate come 2021 general elections,” said Tweheyo.

However, the Minister for Constitutional Affairs, Gen Kahinda Otafiire who was chief guest said the decision doesn’t stop any other NRM candidate from standing.

“Those in NRM who want to stand against Museveni, we have not stopped you. Stand and if we defeat you, you should not think that we locked you outside”.

He cautioned the youths against following the Bobi Wine-led ‘People Power’ pressure group.

“I want to request you the youths don’t go to Kyarenga. It’s a song and if you go to a song and forget to cultivate and graze cattle, you will suffer from jiggers. Stand warned of those dressing you red overalls during the night,” said Otafiire.

He went on to say that as a party, NRM will not subdue to the advice by the opposition to change their winning captain (Museveni) come 2021.

“Opposition only wants us to remove Museveni and put a captain whom they can at least win. Tell them that we are not stupid to change a winning team,” the Minister said.

“If you want to have Bobi Wine for singing, it’s also not bad. But for us, we don’t want to sing Kyarenga. Ours is to work on roads, improve hospitals, put up universities, maintain peace, and unite Africans in the East African Community,” explained Otafiire.

He said the so-called bush war leaders will not die on power but will be caught up by age and leave the youths to take over.

“Museveni is not God but you should wait. Our past will catch up with us but we don’t want to leave you with problems”.

Otafiire noted that Museveni still has a role to unite Africa stopping foreigners from cheating it.

“It’s our worry that as Uganda if we don’t unite with others, there is no way we will become strong. Those who have been sucking us have been doing so because we are divided. They steal us; lie to us and all we do is clap,” Otafiire said indirectly making reference to Western powers.

“And in future if you the youths don’t unite, Africa will perish because you were not in the agricultural revolution, you never helped us in industrial revolution, you’ve done nothing in the jet revolution or the ICT revolution. Now, the artificial intelligence revolution has begun but you Africans have not even learnt how to make a needle”.

He said Ugandans should not trust Bobi Wine who according to Otafiire is only looking to restore colonial rule in Uganda.

“You disagree with Museveni and you run to Chatham House to report. Are you the President of England? If you want to report to America, remain there. Actually you are asking us votes to bring here whites to rule us. Gone are the days, we are tired of them [whites],” said the Minister.

The Minister laughed off the idea of the  opposition forming a coalition to front a single candidate in 2021.

Former UPC’s Minister, Chris Rwakasisi who spoke at the event said Museveni is a powerful candidate to defeat.

“There are only a few Musevenis in this world or Africa. There could actually be none out there with the capacity of fighting his enemy, defeating him, bringing him back to work with him. Which other President can do that?” Rwakasisi asked. 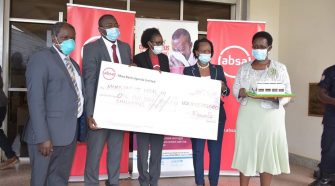