Eddie Mutwe was arraigned before the Chief Magistrate’s Court in Gulu on Tuesday where he was charged and later remanded.

Mutwe had been in detention since August 25. Initially, Police and the military all denied knowledge of his where abouts, prompting his lawyers to seek an order by court to compel the security agencies to produce him.

Days later, Police finally admitted he was under their custody.

The accused who was represented by his lawyer, Tony Kitara could not enter a plea since the magistrate’s court had no jurisdiction to try an offence (treason) of capital nature.

The same court also read the same charge of treason to Musa Senyange who was allegedly driving the grader which interrupted the convoy of he President on the same day.

It follows the chaos that broke out on August 13 in Arua district on the last day ofcampaigns in the Arua municipality Parliamentary by-election. President Museveni who was also in the area to campaign for the NRM candidate was driving through Arua town when his motorcade reportedly was attacked by opposition supporters. 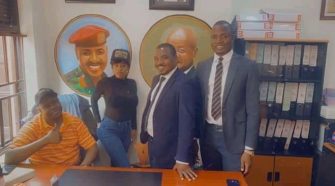