Boris Johnson has been elected new Conservative leader in a ballot of party members and will become the next UK prime minister, the BBC reported on Monday.

According to BBC, the former Mayor of London also former Foreign Secretary beat Jeremy Hunt after garnering 92,153 votes while the latter polled 46,656.

Johnson, 55, now replaces Theresa May who resigned on June 7 amid mounting pressure and resistance from both the opposition and within her party regarding her approach of leaving the European Union (EU) – Brexit.

For the last three years, May had attempted to navigate the difficult and complex process of exit but in the face of extreme opposition in the British Parliament.

“I feel as certain today as I did three years ago that in a democracy, if you give people a choice, you have a duty to implement what they decide,” May said in May.

She faced immense pressure within her party and outside for her Brexit plan. But the pressure on her increased after disastrous local election results in May, when the Conservatives lost more than 1,300 seats in municipalities around the country and voters vented their frustration over the Brexit infighting and deadlock.

On Monday, Johnson used his acceptance speech to praise his predecessor, saying it had been “a privilege to serve in her cabinet”.

He promised the audience he would “deliver Brexit, unite the country and defeat Jeremy Corbyn”.

Boris Johnson has been the Member of Parliament (MP) for Uxbridge and South Ruislip since 2015, and was the MP for Henley from 2001 to 2008.

He was Mayor of London from 2008 to 2016, and from 2016 to 2018 he served as Foreign Secretary. A member of the Conservative Party, Johnson identifies as a one-nation conservative and has formerly been associated with both economically and socially liberal policies. 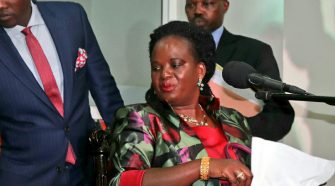