The Central Bank has maintained its signaling rate at 10 percent amid a steady pickup in economic activity. On Friday, two months after Bank of Uganda eased its monetary policy to the lowest in many years, Governor Tumusiime Mutebile announced that the economy is gathering momentum and that a neutral monetary policy stance was warranted.

Bank of Uganda forecasts that the economy will grow by 5% to 5.5% supported by monetary policy, increased activity in agriculture due to improved weather conditions, recovery in external demand and Foreign Direct Investment (FDI).

In its Consumer Price Index for the month of July, Uganda Bureau of Statistics (UBOS) reported a 0.7% drop in Annual Headline Inflation to 5.7 from 6.4 in June, largely driven by a decline in food price inflation. The inflation in food prices dropped by 5.2% to 12.9 percent in the same month.

“Headline inflation is likely to decline further in the coming months as the effects of higher food prices continue to dissipate,” Mutebile told journalists on Friday.

Mutebile said that in the medium term, both annual headline and core inflation is projected to remain in the 5% range. But he noted that uncertainties like food crops inflation and exchange rate still pose risks in the long term.

With regard to trade balance, Bank of Uganda said the current account balance continued to improve in the just concluded 2016/17 fiscal year. The current account deficit as a percentage of GDP declined by 2.2% to 2.8% compared to the previous year.

Following Central Bank’s announcement, it remains to be seen whether commercial banks will ease their lending rates. High cost in private sector credit has significantly subdued growth in the manufacturing and retail sectors. 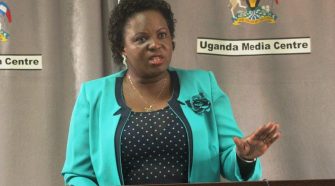 NAKASEKE: Govt to Hand Over 300 Mailo Titles in Effort to Resolve Land Evictions