Officials of Bank of Uganda led by the Governor, Emmanuel Tumusiime Mutebile have been tasked to avail accountability of a sum of Shs 478bn that was injected in the defunct Crane Bank Limited for liquidity support.

The demands were made by the Chairperson of the Parliamentary Committee on Commissions, Statutory Authorities and State Enterprises (COSASE) Abdul Katuntu during the BOU probe on the closure of Crane Bank.

“I have had an opportunity to go through the audit report. It talks about the impairment of the amount due from Crane Bank Limited receivership, what is not in doubt is that Bank of Uganda pumped in Shs 478bn,” Katuntu who is also MP for Bugweri county said on Monday.

“What we want to satisfy ourselves with is at the tail end in Crane Bank, was it utilized in accordance to the act for which it was acquired?” Katutuntu stated.

It should be remembered that the then Statutory Manager of Crane Bank Ltd, Edward Katimbo Mugwanga who received the liquidation funds was never allowed time to handover since the process (selling of the bank to DFCU) was concluded without his knowledge.

Katimbo told the committee last week that he had worked in the capacity of Statutory Manager for three months and before he could finish his work, he received a message from a colleague through messaging platform, WhatsApp showing files being transported on a truck from Crane Bank to DFCU.

He also revealed to the committee that on return, he was given a letter terminating his contract for the position.

Katimbo will, nevertheless, be required to avail accountability showing how he spent the sum of Shs 487bn that was given to his office as the statutory manager was utilized.

On the same note, the committee has highlighted that preliminary investigation into the bad-loan book (containing non-perfoming loans) that was sold to DFCU shows a duplication of account loans to a total of 4,458 loans.

“Over the weekend, as the auditors were going through the Compact Disc (CD) of the bad book, I spent a few hours with them, we realised it was not going to be possible to go through that entire CD within one day beacuse the information on CD is most relevant on two issues remaining on the audit,” Katuntu said.

Katuntu added that, “One thing we noted with the auditors, is that there was a lot of duplication of the account loans that were transfered to DFCU almost to a tune of 4,458 loans”.

Katuntu adjourned the probe to Wednesday morning to allow the auditors go through the entire Bad Book which will enrich the committee work as they plan to wind up their engagements with Bank of Uganda. 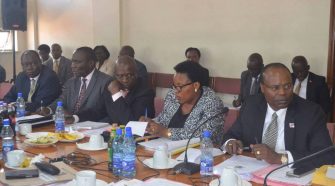