The Central Bank has maintained its CBR at 9% saying the country’s economic outlook looks more positive than it was forecast in February.

The Bank of Uganda Governor, Emmanuel Tumusiime Mutebile said that the economy continues to recover and that the Composite Index of Economic Activity, the highest frequency indicator of the Central Bank points to “a relatively robust economic growth in 2017/18”.

As such, Bank of Uganda forecasts that the economy will grow at 6.5% up from 3% last year.

He was releasing the Monetary Policy Statement for the month of April.

The Governor noted that on the basis of the assessment of the current and evolving macroeconomic situation, the BoU will maintain the Central Bank Rate (CBR) at 9.0%.

“This is consistent with supporting economic growth and achieving the inflation target over the medium term,” he said.

The decision to maintain the signalling rate (CBR) at 9% follows a consistent easing in monetary policy by BOU for the last eleven months, with hope that commercial banks could also lower their prime lending rates. The CBR has declined by eight percentage points since April 2016.

Mutebile told journalists that despite relative recovery, the visible weak indicators of aggregate demand pose possible risks to the country’s inflation. He added that inflation could further spike as a result of the planned increase in indirect taxes especially on fuel pump prices and financial services in the 2018/19 financial year.

BOU forecasts inflation to stabilize at the medium term target of 5% by the end of 2019.

Meanwhile, Bank of Uganda has declined to give its position regarding the standoff that recently emerged between commercial banks and Uganda Revenue Authority over provision of financial details of customers.

In a letter last month, URA asked all banks to provide financial information of their customers for the years 2016 and 2017 which Bankers’ still protest.

In a press release yesterday, the Uganda Bankers’ Association noted that the notice by URA has legal implications for Bankers have an obligation of confidentiality to their customers. The bankers said they would await the regulator (Central Bank) to pronounce itself on the matter.

When asked to comment on the issue, Mutebile hesitantly declined, even when it remains a big concern to people who deposit with banks. 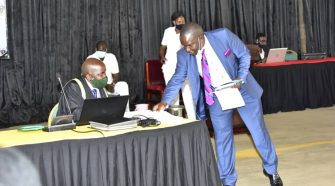