Uganda has Sunday beaten South Africa 2-1 at the final in the COSAFA U17 Women Championship which has been happening in Mauritius.

The East Africans who were invited to play in the Southern Africa tournament as a guest nation scored their first goal through Fauzia Najjemba in the 56th minute. She had taken several shots on goal but they couldn’t yield any fruit.

The South Africans equalising in the 74th minute but Captain Juliet Nalukenge could not settle for a a one all draw when she tapped the winner in the 86th minute.

The thrashed Botswana 12-0 at the Semi final to qualify for today’s encounter.

Uganda started the tournament with a 1-1 draw Zambia on Friday last week, before settling in with an overwhelmingly 11-0 victory over hosts Mauritius in their second game.

As if that was not enough, the talented Ugandan young ladies humiliated fragile Comoros 20-0 in their third game, thanks to captain Juliet Nalukenge who netted 7 goals.

The Ugandans, now victors have ended the tournament having scored scored 46 goals in the five games played, out of which 18 have been tapped Nalukenge. 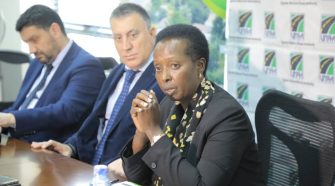