The British High Commissioner to Uganda, Peter West has donated equipment to the police Criminal and Investigations Department to be used in the fight against drug trafficking.

Speaking at the function held at CIID headquarters at Kibuli on Tuesday, West said that there is need to fight against trans national crimes like drug trafficking.

“These will help in solve the challenges associated with the scourge of drugs,”he said.

The police director in charge of Criminal Investigations Department, Grace Akullo has revealed that the country doesn’t have a scanner to detect drugs at the major entry and exit points.

“The available scanner at Entebbe airport can only detect guns and other metals but can’t be used to detect drugs hidden in bags and big dolls by traffickers,” Akullo said.

The Acting commissioner in charge of anti narcotics, Tinka Byarugaba said over 1900 kilograms of cannabis, heroine 64 kg, and 14.6 kg of cocaine were confiscated at the airport last year.

He said police officers lack skills in terms of investigating and detecting drugs. 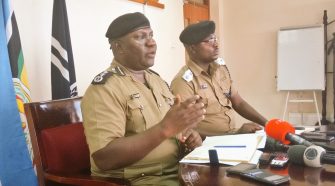