National Association of Broadcasters (NAB), has asked communication regulator, UCC to rescind its recent order to a number of radios and televisions to suspend senior staff in relation to their coverage of the arrest and subsequent remand of Kyadondo East MP, Robert Kyagulanyi Ssentamu alias Bobi Wine, on April 29.

In the last couple of days, UCC directed the suspension of Producers, Head of News and Head of Programmes of radios including Akaboozi FM, Beat FM, CBS FM Sapiensa FM, Pearl FM and Simba FM.

UCC says there are concerns that the nature of content aired on these broadcast stations particularly during live programmes, breaking news, and main news bulletins on that day did not comply with the minimum broadcasting standards.

But according to Kin Karisa, the NAB Chairman, the move if effected, is likely to undermine the quality of journalism by creating an environment of fear and as well weaken standards and controls already established at the media houses and amplify the risk that led to UCC’s intervention in the first place.

“NAB and its members believe that media plays a key role in shaping a healthy democracy by exposing loopholes in the democratic system which ultimately help government in filling them and making the system more accountable, responsive and citizen-friendly,” Kariisa says in a statement.

He adds that suspending the said staff will compromise the opportunity for dialogue between UCC and broadcasters based on past relationship.

Kariisa has thus appealed to the communication regulator to hold a meeting to discuss the murder with the media houses in question.

“National Association of Broadcasters hereby recommends that UCC rescinds the order, to suspend media staff pending an urgent meeting between the two parties at your call,” adds Kariisa.

But when SoftPower News contacted Ibrahim Bbosa, the UCC Public and International Relations Officer, he said, by press time, the commission had not yet received NAB’s letter.

He however said that, even then, there stand is that the staff in question should to step aside from there positions pending investigations.

“We haven’t received the letter yet, at least I haven’t seen it. I am going to check in our registry, and so, I can’t respond authoritatively to that,” Bbosa said.

“But our current position even before we receive the letter is that for the investigation to happen progressively and independently without undue influence, these people who were dealing in the programming and production of content need to step aside so that they allow investigations to happen,” he told SoftPower News.

“They can do other assignments in their institutions other than dealing with content production and provision,” he added saying, after the investigations the report will be issued and the findings could be favourable or unfavourable for them.

He says it is normal and a regular investigation practice for an office holder of an area being investigated to step aside to give room for investigations to happen.

Bbosa says UCC is not saying that the staff in question loses their jobs, but instead leave the area of content production and propagation since it is under investigation.

“Other people can be assigned to carry out that function so that we review exactly what happened in line with our standards and the legal and regulatory framework and then we shall make a pronouncement to that effect,” he says.

NAB is an Association that brings together broadcast media (radio and television) as well as online news publications. On NAB, the online publications are represented by Sarah Kagingo, the Managing Editor of SoftPower News. 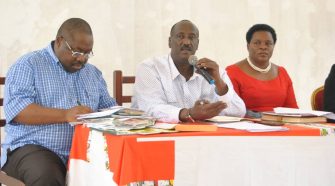