BUJUMBURA – Burundi’s ruling party, cndd-fdd is set to hold a delegates’ conference on Sunday this week to elect the party’s flag-bearer and President Pierre Nkurunziza’s successor ahead of the east African nation’s presidential elections slated for May 20 2010.

President Nkuruzinza said last year he would not seek a fourth term in office and urged other members of the ruling party to take up the challenge. It’s not yet known who will be the favorite candidate among party members though some have previously mentioned General Evariste Ndayishimiye as the party’s preferred replacement.

Ndayishimiye, a historical who fought along-side President Nkurunziza during the country’s civil war in which 300,000 people died is the current secretary – general of the ruling party.

Another potential opposition member and former rebel leader Agathon Rwasa said he would participate in the upcoming elections.

In a statement, a copy of which this news website has seen, Burundi’s Interior Minister Pascal Barandagiye said all members of the ruling party and invited guests will convene in Gitega, the country’s new capital city.

“The country’s authorities working with different security agencies will make sure the venue of the conference will be secured,” Barandagiye said.

Burundi experienced political crisis in 2015, when President Nkurunziza ran for a third term and was re-elected in elections boycotted by most of the opposition.

His opponents said the third term was unconstitutional, citing the Arusha Accord which bars a Burundian president to seek a third term.

At least 1,200 people were killed and more than 400,000 displaced in violence that the UN says was mostly carried out by state security forces. Government denied the allegations and has since become the first country to withdraw from the International Criminal Court as the government rejected criticism of international partners.

Nkurunziza in 2018 said he would not run again but that comment was received with skepticism by some opposition members.

His government has also been under attack from several rebel groups. Last October, several people died during clashes between Burundi security forces and a rebel group based in the Democratic Republic of Congo.

The Burundi rebel group, RED-Tabara, many Burundians say is headed by outspoken opponent politician, Alexis Sinduhije – believed to have carried out the attack. In Bujumbura, many hope for better with the upcoming elections.

Bujumbura accuses Rwanda of attacking the Burundian territory and of sponsoring groups in DR Congo to destabilise Burundi.

“Burundians who are dissatisfied with President Nkurunziza and wanted to remove him by use of force have no reason to fight. There is no need to fight now because Nkurunziza is leaving,” Michael Rebero, Burundian teacher said. 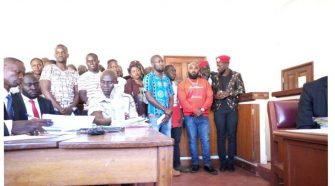