The ruling NRM party has contested the eligibility of Democratic Party (DP) candidate in the Busia district chairperson election citing inconsistencies in the name registered with the Electoral Commission and that on his national identity card.

NRM says that Deo Njoki, the DP and opposition flag bearer in the elections slated for November 28 is not a registered voter.

The issue is contained in a letter to the Electoral Commission authored by Oscar John Kihika, the Director of Legal Services in the NRM party.

“These are two different persons under the law and there was no legal document that was filled with the Commission at least at the time of nomination to show that the two said persons are one and the same,” the document by the NRM legal director partly reads.

They say that there is no person registered as Hasubi Deogratius in the register for Busia district and that this renders the nomination of the DP candidate void.

“Hasubi Deogratius Njoki is not a registered voter as required by Article 183 of the 1995 constitution and Section 12(b) of the Local Government Act and Section 4(i) of the Parliamentary Elections Act (PEA).

NRM says it possesses documents and evidence which will at the time of hearing of the matter prove “the illegality in nominating Hasubi Njoki as a candidate and case law to support our argument and position”.

The complaint, the ruling says, is pursuant to Section 15 of the Electoral Commission Act.

This is the latest twist in the race for Busia LC5 that Njoki finds himself entangled in. Weeks ago, Njoki was almost denounced by his party, DP due to an appointment by government to be a Commissioner at the Uganda Human Rights Commission, a government entity.

He however later declined the job offer. He said taking the job would be a disappointment to his party and his supporters who have entrusted him to lead Busia district.

In the race, Njoki faces competition from NRM’s Paul Boniface Oguttu as well as Chrispus Bwire, Tony Ojambo and Geoffrey Wandera all of them independent candidates.

The Busia LC5 seat fell vacant in May, after Court of Appeal in Mbale District threw out Ouma Adea on grounds that he had been convicted of corruption in 2013. 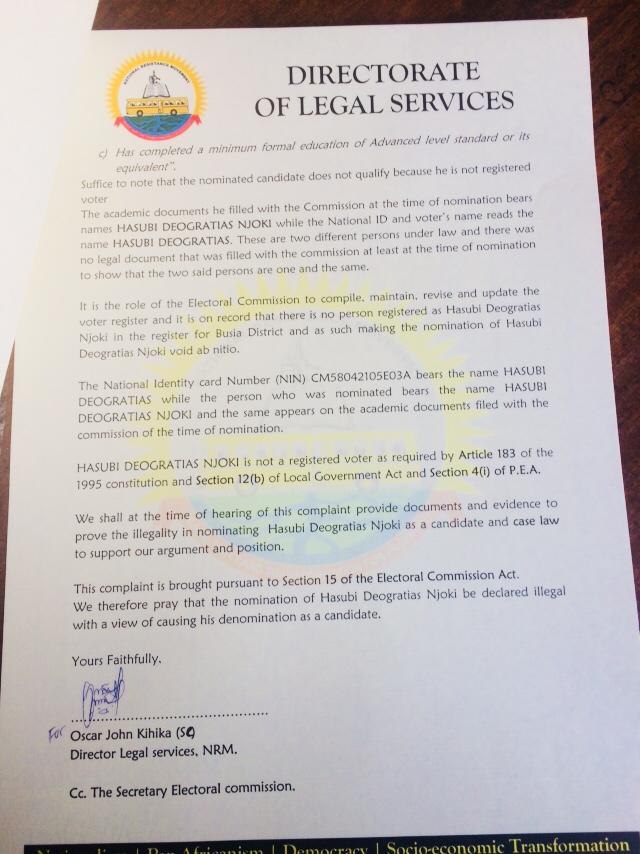