President Yoweri Museveni has underscored the role of the private sector in any country’s economic development regarding it as “the base of modern society”. He said it is crucial for all relevant authorities to support private investments.

Museveni was Wednesday speaking at during the International Labour Day celebrations in Agago district in Karamoja.

During his address, the President outlined some of the investment made by government in road infrastructure as well as energy, which he said is aimed at reducing the cost of doing business.

He alluded to the example of the U.S. which he said is a powerful country due to its vibrant private business sector.

“The base of the country is based on business. You find one company like Walmart [American multinational retail corporation] is almost as rich as all Africa put together. So Africans need to wake up and realize that modern society is based on the private sector,” the President said.

He also highlighted events of 1972 when Uganda’s former President, Idi Amin expelled Asians, who had at the time dominated the country’s trade and industry. Museveni said Amin’s decision to expel this critical segment of the economy resulted into a major economic paralysis.

“Idi Amin thought he was a very powerful man, he chased away Indians, in no time, he did not even have sugar or soap or salt”.

He revealed plans to establish a sugar factory in Amuru district but said the process has been stalled by “those who don’t understand how to deal with business people”. He again made reference to the controversial sugar bill, doubling down on his criticism to legislators whom he has recently faulted for frustrating efforts by investors.

The bill was this week shelved after President Museveni and Parliamentarians failed to agree on the clauses relating to zoning of sugar production. MPs are in favour of small businesses while the President is supporting big manufacturers.

Government is focused on establishing more hydropower dams so as to increase Uganda’s electricity generation capacity so as to make electricity cheaper for manufacturers, Museveni said in Agago, citing Isimba, Bujagali and Agago power stations.

He as well noted the strides made in expanding the network for paved roads which will connect the country and ease the movement of people and cargo.

“Here the target is to have cheap transport costs and cheap electricity costs. What does that mean? It means for the manufacturers, people of the hotels, the cost of production will be lower,” Museveni said.

“With lower costs, more factories. More factories, more jobs. This is not a story, this is already happening”. 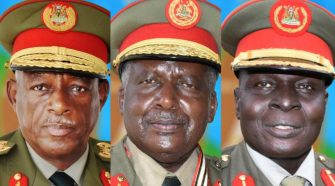