City businessman Simpson Birungi of Birus properties Limited was on Wednesday quizzed on the manner he acquired plot 60/62 along Aldina Road in Jinja.

The commission of inquiry into land matters learnt that a Kampala businessman paid less than Shs.2.5 million to buy a government property in Jinja town.

He was also blamed on the manner he evicted tenants before demolishing the building.

On Wednesday, Birungi told the commission that he was approached by a group of brokers who wanted to sell a plot in Jinja.

“They told me the plot had an old building and that I could acquire it at a low price,” Birungi said.

He, however, surprised the commission when he told them that he paid only Shs2.5 million for the building plus Shs70 million to brokers.

The commission accused him of bribing government officials who made it easy for him to fraudulently take over the government property. 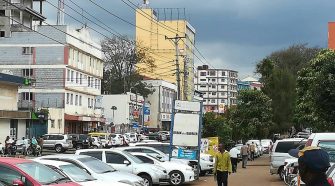