The Busoga Parliamentary Caucus has summoned State Minister for Land and Member of Parliament for Bukono county, Persis Namuganza tomorrow, Friday 9 for questioning on her alleged attempts to harm and kill the Speaker of Parliament, Rt. Hon Rebecca Alitwala Kadaga.

In a statement by the caucus Vice Chairman, Grace Moses Balyeku, Hon Namuganza allegedly severally insulted Ms Kadaga, the people of Kamuli and belittled the current Kyabazinga of Busoga.

“It is alleged that you Hon Princess Persis Namuganza, on repeated occasions this year have physically and on social media abused and insulted the people of Kamuli district and part of Namutumba district as being filthy and unhygienic in the whole of Busoga region,” read part of the statement.

Balyeku further notes in the statement that while on a rally in Namutumba district, Hon Namuganza bashed Kadaga as “being unqualified, unfit and improper” to hold the office of the Kamuli district woman Member of Parliament adding that she has also “outlived her usefulness in the office of the Speaker.”

Kadaga and Namuganza have for long been said to be fighting over who leads Busoga kingdom with the current leader William Gabula Nadiope IV getting his backing from Kadaga while Namuganza has been a supporter of Columbus Wambuzi.

The situation worsened when Kadaga installed a chief in Wambuzi’s backyard in Bukono recently which invigorated the motormouth youthful minister Namuganza to swing into action condemning the action which she described as undermining.

“This week, I saw the Speaker of Parliament in my constituency without my consent, presiding over the reinstatement of the new Bukono cultural leader. This is my constituency, so I have a strong stake in Bukono leadership,” Namuganza said at the time.

She further questioned why Kadaga would visit her constituency in violation of the President’s directive to reinstate another Bukono cultural leader. “She [Kadaga] must understand that this is Bukono not Kamuli.”

However, Balyeku, a known Kadaga supporter mentions in the statement that it is alleged in the social media videos that Hon Namuganza threatened to kill Kadaga.

“The videos further reveal that you Hon Princess Persis Namuganza plans to kill or harm the said Rt. Hon Speaker.”

“You incited the people of Bukono to injure or harm Hon. Rebecca Kadaga by pelting stones and also use other blunt objects”, the statement further read.

According to the statement, Namuganza at the beginning of the year abused and belittled the Kingdom’s Kyabazinga Prince Gabula Nadiope IV that he was “illiterate and therefore incapable of leading the people of Busoga”.

Balyeku said that Namuganza risks facing the bitter decisions of the caucus which shall be taken on Friday without listening to her side should she fail to appear. He says that if established that the accused is guilty, her behavior contravenes the laws of the land and known Busoga norms.

Efforts by this website to talk to Namuganza have been futile since her known telephone contacts have been unreachable. 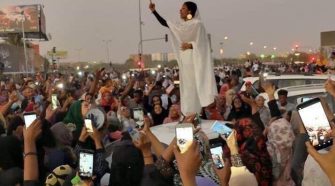