Two of the six people convicted of causing nuisance after pleading guilty to using harmful chemical preservatives on meat and fish have expressed interest to change their guilty plea which they made before City Hall grade one magistrate Beatrice Khainza last week.

The two Isma Mutebi and Isa Senoga who had appeared with four of their colleagues to receive their sentence on Wednesday asked the trial magistrate to re-read the charges against them claiming they did not understand them very well.

But the request was objected to by the state prosecutor, Hillary Tumusiime who said that two lacked clear grounds for their request and that they were only plotting to waste court’s time.

The magistrate has remanded these people back to Luzira until tomorrow when she will deliver her ruling on the matter.

“I need some time to look into this matter before I pronounce myself,” Khainza said.

The two were taken back to court cells amidst sorrow among their relatives and friends who had turned up in court in large numbers.

The butchers were arrested last week by Kampala Capital City Authority (KCCA) law enforcement officers during an impromptu health inspection conducted in parts of Kampala city. In addition to discovering unknown chemical concoctions in their butcheries, they were found to be working under unhygienic conditions. 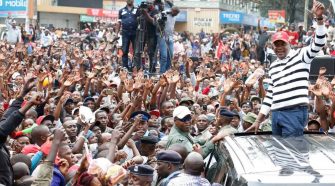