There’s a revived public outcry following media reports that government has proceeded with plans to allow the construction of a hydro power dam near one of Uganda’s most spectacular natural attractions – Murchison falls.

Earlier this year, stakeholders in the tourism sector launched a protest calling on government to cancel plans for the dam project. They said this was a threat to the waterfalls and that it undermined efforts towards conservation.

The concerns stemmed from an advert carried in The New Vision newspaper on June 7, the Electricity Regulatory Authority (ERA) where ERA announced a notice of intended application for a license from Bonang Power and Energy (Pty) Limited.

The proposed site for the dam had coordinates similar to those of the Murchison waterfalls, which implies that the dam would be erected at the very place where the falls are situated.

In August, there were reports that Cabinet has reversed the decision, an action that was welcomed by the private tour operators.

However, on Thursday, New Vison daily newspaper reported that Cabinet has cleared feasibility studies for the construction of a dam at the Uhuru falls in the Murchison falls national park.

State Minister of Tourism, Godfrey Kiwanda is quoted as having said on Wednesday that: “We need to investigate through the implications of the power dam. We have backtracked on an earlier decision where Cabinet had resolved that the feasibility study should not be conducted”.

The statement has again sparked outrage within the wider public as well as your operators.

Amos Wekesa, the proprietor of Great Lakes Safaris said on Thursday that the President is being misled.

“I think someone has misled the President… Government has built a highway through Murchison falls, oil exploration has its toll on Murchison falls,” Wekesa posted on Facebook.

He said “we should defend Murchison falls”.

The latest development has revived a social media campaign under a hashtag #SaveMurchisonFalls with an aim to protect the attraction.

Tour operators have previously advised that government begins to explore other alternative sources of energy such as solar, bioenergy and other green energy systems.

“It is high time we rethought our strategy towards energy generation and distribution in order to mitigate the effects of climate change,” Evarist Kayondo, the Chairman of the Association of Uganda Tour Operators said in August.

WE CAN'T TELL THE NEXT GENERATIONS THAT WE HAD THE MOST POWERFUL WATERFALLS IN THE WORLD.

We MUST defend our legacy, our pride, our nature.

How's not amazed by the permanent rainbow? & the thundering roars of Murchison Falls?!#SaveMurchisonFalls
Courtesy Photo pic.twitter.com/5OVKVlU9jL

what to eat tomorrow. Greed and corruption has become part of Ugandan leaders and not thinking what future holds. Why do you allow investors to come destroy one of the best falls in Africa, why not theirs at Augrabies falls on orange river in South Africa. #SaveMurchisonFalls pic.twitter.com/rH8JiqaRFD

The thundering #MurchisonFalls are the most spectacular thing to happen on the Nile along its 6,700km, the 50m wide river is squeezed thru a 7m gap in the rock and crashes thru its narrow gorge w/ unbelievable power.

Someone just said, “On Murchison Falls my thinking is that there has been a lot of dishonesty from the part of gov’t and in particular our own tourism sector leadership.” I can’t agree more

Greed is an understatement. What the heck is wrong with these people! #SaveMurchisonFalls pic.twitter.com/l1mOL8TTE2

Murchison Falls is the world's fastest water fall – that explains why Murchison Falls National Park is Uganda's most visited game park. What level of insanity can make anyone to think of building a power dam over the falls? #SaveMurchisonFalls pic.twitter.com/xNwxnLygrh 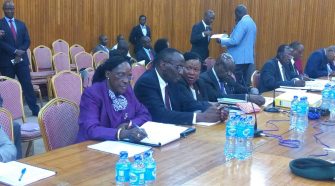