Government has approved the proposal to use Mobile Money as a platform for investing in government securities.

The proposal was given a green light during a Cabinet meeting held on Monday at the Office of the President.

A government security is a bond or other type of debt obligation that is issued by a government with a promise of repayment upon the security’s maturity date. Government securities are usually considered low-risk investments because they are backed by the taxing power of a government.

He also said that this move will enhance the distribution capacity of government securities with the ability to reach out to individual retail investor especially those in rural areas, as well as reduce the cost of domestic debt.

“It will also widen the scope of investors which then reduces the dependence on a few players such as commercial banks, offshore players and institutional investors that tend to bid highly in the auctions given that government has limited choice,” Opondo said.

To the retail investors, said Opondo, the new product will enhance savings and investment and will provide the opportunity for local people to save and earn some income.

Government also believes access to its securities will become more easier since retail investors will not have to physically deliver bids to their banks which are sometimes a long distance away.

“It is an opportunity to enhance private sector credit as government securities are the highest form of collateral for loans,” the government spokesperson further told the press.

The Ugandan diaspora, especially the investors will also have an opportunity to save and earn a good return while developing their country, government adds.

Mobile money has drastically become the highest medium of financial transactions in Uganda over the recent past, with 22 million subscribers registered for Mobile Money in 2017. The platform has become instrumental in bringing Ugandans into the formal banking sector.

In 2017, estimates by Bank of Uganda (BoU) placed mobile money transactions at Shs 54 trillion up from Shs 44 trillion in 2016.

It will also provide for appointment of Registrar, Deputy Registrar, and Assistant Registrar.

The Bill will reduce; the lengthy Procurement lead time, the number of key players in the Administrative Review from the current three to one tier, as well harmonize procurement regulations for KCCA and local governments. 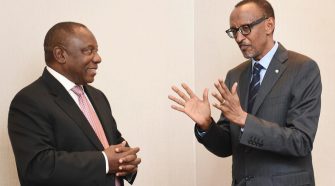 South Africa and Rwanda in a Dirty Fall Out – The Star