Cabinet has approved the principles that will lay foundation for the establishment of the Uganda National Kiswahili Council, in government’s last push to make Kiswahili the official language of communication in Uganda.

At a news conference on Tuesday, government spokesperson, Ofwono Opondo revealed that during a Cabinet sitting on Monday, the principles establishing the Council were passed.

According to Opondo, the Council will guide the planning process, implementation of interventions and allocation of resources to the usage and development of Kiswahili as the common language adopted for use among Ugandans.

The other objective of the Kiswahili Council is to ensure that the policy, legal and institutional framework are in place through setting standards for effective promotion, development and usage of Kiswahili at all levels.

The entity will as well provide a framework for assessing the responsiveness of plans, policies, and interventions through systematic implementation of Kiswahili.

“It will also provide harmonization, coordination and collaboration among MDAs and stakeholders in the promotion, use and development in Uganda through registration of all the stakeholders in Kiswahili,” Opondo said.

Opondo added that the Council will enhance the capacity of duty-bearers to provide Kiswahili services and resources.

Last week, the State Minister of Gender, Peace Mutuuzo, said the approval of the Council is part of Uganda’s obligation to the East African Community (EAC). Two of the EAC countries – Kenya and Tanzania – use Kiswahili as the official language.

Minister Mutuuzo also revealed that Kiswahili will be the official medium of communication on the Uganda Airlines.

“We have the airline which will be communicating in Kiswahili because we can’t communicate in the languages of all the 65 different tribes [in Uganda],” she said.

Although the Kiswahili language is part of the education curriculum in Uganda, the language has for many years been a monopoly of personnel in the armed forces – Uganda Police and Uganda People’s Defence Forces.

Luganda (which is primarily used in the capital Kampala and surrounding districts) and English remain the prominent languages of communication.

Since the British colonial administration, Uganda’s education system has upheld the English language as the only mode of examination from Primary throughout to University. Other languages including Kiswahili are only offered at an optional basis.

However, Article137 (2) of the East African Community treaty states that Kiswahili shall be developed as a lingua franca of the community to support sustainable development and regional integration.

There have been a long-standing sentiment that Uganda and other EAC countries like Rwanda and Burundi are dragging their feet in regards to implementing the provision in the EAC treaty.

Swahili is spoken by tens of millions in three African Great Lakes countries (Kenya, Tanzania, and the DRC) where it is an official or national language.

In 1985, Swahili was made a compulsory subject in all Kenyan schools.

Some 80 percent of approximately 62 million Tanzanians speak Swahili in addition to their first languages.

The five eastern provinces of the DRC are Swahili-speaking. Nearly half the 81 million Congolese reportedly speak it. 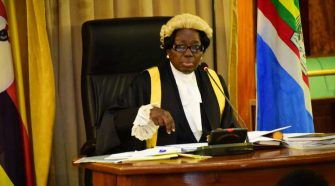