The Head Coach of Malawi’s football giants, Masters Security FC, Abbas Ismail Makawa, has Thursday vowed to outshine Uganda’s Proline FC on Saturday in the first leg of the preliminary stage of the CAF Confederations Cup in Kampala.

He made the remarks just moments after touching base to Entebbe International airport on Thursday afternoon.

“We have come here on a mission and we know it will be a tough match but we are going to do everything possible to win the game and go back home with a positive result so as to have an easy job in the return leg,” Makawa told reporters.

“To defend is not our option, we have come here to attack. What we want is to have positive results. If you are going to defend, how will get the desired positive result?” he asked.

Proline who are debutants in this tournament, host their games at KCCA’S StarTimes Stadium Lugogo which is an artificial turf and commenting on it, Makawa said: “It is a challenge because we are used to natural grass but we have also played on artificial turf before. So we will train on it tomorrow and we talk. I hope the boys are going to enjoy it.”

Asked why they arrived Thursday instead of Wednesday as earlier communicated, the tactician said they had issues with flight booking.

The return leg will be played between 23 to 25 August 2019 in Blantyre City and the successful winner on aggregate over the two legs shall take on either Rwanda’s AS Kigali or Tanzania’s KMC.

Proline beat Bright Stars 5-4 on penalties after a 1-1 draw in regulation time to win the Uganda Cup and that will see them represent the country in the second tier of CAF’s continental competition. 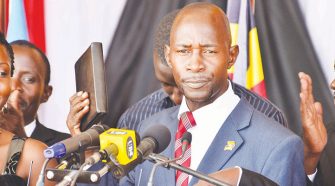