The Secretariat of the ruling political party, National Resistance Movement (NRM), has Sunday come out to speak on the recent statement by the newly appointed Presidential Advisor on Kampala Affairs, Catherine Kusasira, when she said that she is more superior than the party’s top leaders in Kampala.

Kusasira, a musician, Saturday told a local television that NRM leaders in Kampala especially the Central Division Chairperson, Salim Uhuru, should officially write to her if they want to meet her. Uhuru had previously (after the appointment of Kusasira and Buchaman as presidential advisors) said he would invite the duo to Central Division as the area party leader for a formal introduction.

“The position I have is more superior whether they want it or not. They have to formally write to me if they want me to meet them. To be a Senior Presidential Advisor, it means I’m above them. They have to request me to go meet them to see how we can develop Kampala,” Kusasira told a local television on Saturday.

However, the Secretariat’s spokesperson, Rogers Mulindwa disagrees with the musician. He told SoftPower News that Kusasira and all other Presidential Advisors are below all members of the party’s National Executive Council (NEC) as per their structural arrangement.

“My sister Catherine Kusasira could be speaking out of ignorance, she may not be privy to the operation of the party structure. Mr Salim Uhuru and other NRM District Chairpersons are members of NEC which is chaired by Mr Yoweri Museveni and all NRM Members of Parliament, Local Council Five Chairpersons, Municipality Chairpersons and Flag bearers and the Historicals like Mzee Kirunda Kivejinja and others sit on it. It contains almost 800 members,” Mulindwa told this news website on Sunday.

“NEC is the one which decides on the Presidential Flag bearer before forwarding the name to the Delegates Conference. So, when someone undermines a member of the NEC, then he or she is ignorant about matters of the NRM party and needs to be helped to understand them,” he added.

Mulindwa says: “I disagree with any party members who say that Kusasira, Buchaman and other newly appointed individuals should not serve the party or their country, but also don’t agree with Kusasira if she talks in such a manner that undermines the NEC members.”

A presidential advisor is way too smaller than a NEC member under multi-party dispensation, he said.

“How many times have you heard of a presidential advisors’ meeting or retreat? So, I think she is simply unaware of that,” Mulindwa explained.

According to Mulindwa, NRM is a mass party which needs everybody on board to work together depending on their abilities.

He also denied knowledge of a reported demonstration by NRM district Chairpersons protesting the utterances of Kusasira which they say are demeaning.

Salim Uhuru, on Sunday told this news website that he is under strict instructions from the party’s Secretary General, Kasule Lumumba not to engage in any media discussion in regard with the matter.

“The SG has called me and told me ‘don’t go to any media on that issue’ so I decided to keep quiet for sometime,” Uhuru said.

He said the development is due to the fact that “all the NRM district chairpersons in Uganda were coming out to strike tomorrow, so she said she is going to handle it at that level”.

He also revealed that the party’s parliamentary “caucus has immediately been called tomorrow, Monday to discuss the same issue.

Efforts to reach the Margret Muhanga, the Caucus spokesperson, to confirm this, were fruitless since she could not pick our telephone calls. 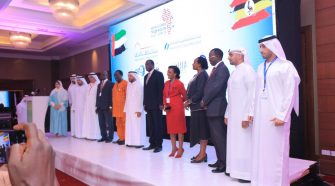