The musician turned politician was addressing the media during the party’s weekly press conference at the DP headquarters in Kampala.

Chameleone said he can’t pick a fight with Bobi Wine whom he has seen for years and he is not in the struggle to outshine him.

“I want to thank my brother Bobi Wine, I hail him again, there are a lot of issues that were trying to raise of how I am a mole. If I was a mole, I would be so rich by now,” the singer said.

“I am not after money, I once took money but it is nowhere to be seen so now I want to take the legacy of delivering and participating in freeing our country from the long dictatorship,” Chameleone stressed before reporters.

On the rising propaganda claiming the two music stars now opposition politicians, are at loggerheads, Chameleone said: “I know Bobi Wine more than you all, from a family level whom I know as a fighter, a brave man”.

“I went to Bobi Wine not for anything but I simply visited him, this was between 8pm to 9pm in the night. If I was against him, he wouldn’t have opened for me at that time of the night,” the Leone Island CEO said.

A day after hosting Chameleone, Bobi Wine tweeted saying he they had discussed about the future of Uganda and his (Chameleone) political ambition.

“My friend Jose Chameleon paid me a visit. We spoke abt future of our country & his political ambition. Told me of his recent decision to join People Power. I advised that he has chance to prove to the oppressed population that he truly stands with them,” Bobi Wine wrote on Twitter on Monday.

Chameleon has Tuesday appealed to Ugandans to stop pitting him against other actors in the political struggle.

“Stop diving us, don’t push me away from my people; if we are fighting in a revolution, don’t tell me that a revolution has closed me out; I am also a Ugandan and have a lot of energy that I want to input in this struggle to liberate ourselves,” he said.

Chameleone who until a few weeks ago was viewed by many as a sympathizer with President Museveni’s government, further noted that he is so honored to be part of the struggle and the revolution against the current regime.

He appreciated DP for welcoming him and believing in him as a member of the struggle.

He told reporters that his decision to join politics was premised on the fact that Museveni’s regime has betrayed Ugandans. 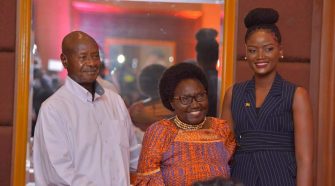