Uganda’s opponents, Namibia have Sunday evening won their first match against Ivory Coast with a late goal scored in the added time, topping Group B.

Charles Hambira who had got a yellow card in the 21st minute put the ball in the back of the net in the 2nd minute of added time to give the Namibians a crucial lead.

Pressure mounted on Ivory Coast’s coach as he wanted to secure at least a goal in the first half prompting him to introduce Brou Manasse Ngoh on the pitch for Pacome Zouzoua in the 32nd minute ending first half on a goalless draw but dominating possession.

Second half started on a high note with Namibia taking some shots on goal before danger man Riaan Hanamub from Namibia was booked with a yellow card in the 51st minute.

With all the hope almost lost by both sides, Hambira headed a ball from a free kick taken in the 92nd minute into the goal.

Namibia now sits on top of Group B with three points awaiting the result from the Uganda Vs Zambia game coming at 10:30pm (EAT) from Stade de Marrakech in Morocco.

Namibia’s next game will be played on January 18 against Uganda. 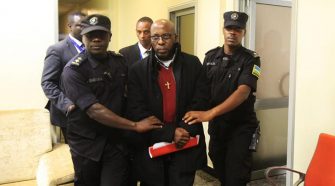