The Chief Justice, Bart Katureebe has expressed concern on the ugly scenes which ensued yesterday Friday in the Buganda road court, when the audience turned rowdy and destroyed court property during the sentence of former Makerere University researcher Dr Stella Nyanzi.

The vandalised property include the videoconferencing and security equipment.

The acts described by Katureebe as uncivilised, offensive and disrespectful of the sanctity of the courts, also saw trial magistrate, Gladys Kamasanyu hit by a bottle in the face.

“This kind of thing is not acceptable. We condemn this kind of hooliganism in the strongest possible terms. We hope the culprits are quickly identified and brought to book,” Katureebe said on Saturday.

“We are working hand in hand with relevant authorities to ensure that there is adequate security to all Judicial officers. I have already asked the Minister of Justice and Constitutional Affairs to raise the matters Courts’ security as a matter of urgency in Cabinet,” he added.

The incident followed Dr Nyanzi’s protest against bringing her for sentence via video link instead of physical presence in Court. She stripped off and displayed her breasts.

He however commended the magistrate for remaining calm throughout the proceedings and the assault on her.

On his part, the newly appointed Permanent Secretary to the Judicial Service Commission, Pius Bigirima, also condemned the acts emphasising the need for Judicial officers to be protected as they perform their duties.

Speaking about the same, the Chief Registrar, Esta Nambayo noted that Judicial officers are neutral arbiters who carefully hear both parties in a matter before marking a verdict in accordance with the law.

Nambayo explained that it is callous for litigants to organise to organise crowds to try and undermine Judicial independence. 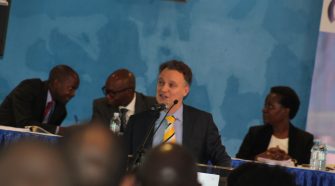