As graft continues to hamper many Ugandans from accessing justice, the Judiciary, the Chief Justice, Bart Katureebe, has set up a six-member taskforce to investigate allegations of corruption in the arm of government he presides over and report back to him in a period of two months.

In the Office Instruction dated July 30, 2019, Katureebe tasked the Taskforce headed by the Inspector of Courts, Immaculate Busingye to commence business with immediate effect.

Other members of the team include Vincent Emmy Mugabo, the Registrar/Public Relations Officer, Susan Abinyo, the Registrar Magistrates Affairs and Data Management, Godfrey Kawesa, the President UJOA, Ayebare Tumwebaze, the Assistant Registrar in the Office of the Chief Registrar/Projects and Solomon Muyita, the Senior Communications Officer.

The instructions follow a series of reports by government owned newspaper, New Vision revealing some of the judicial officers involved in corruption scandals.

On July 9, the Chief Justice welcomed efforts by Vision Group to expose acts of bribery and corruption tendencies in the courts but cautioned them against sensationalizing the matter.

“Interface with the investigations team of Vision Group to understand the scope and purpose of their ongoing project on exposing corruption in the Judiciary,” reads one of the four terms of reference to the Committee.

Several studies have shown that court officers solicit bribes from litigants in order to have their cases listed and to influence the outcome of case judgments and due to such systematic corruption in the justice sector, access to justice is for sale where the highest bidder takes it all.

Now, the Corruption Taskforce is expected to receive the media recordings with a view of identifying the implicated Judiciary staff, who would then be invited to have an interface with the Team.

The team will thereafter make a report to the Chief Justice with recommendations on the way forward by September 30, 2019.

The Chief Justice said his administration will ensure that any court staff captured receiving a bribe will be dealt with in accordance with the law.

“What has been happening is people say they have paid money for court services, but they are usually not willing to bring the evidence to us,” said Katureebe.

“We encourage such audits in all courts, and we are willing to do it as a partnership. Our aim should be to take action on the culprits by the Judicial Service Commission,” he added.

He explained that the Judiciary shall continue to encourage court users and the public to use the available fora to come out and give evidence for firm action to be taken against the errant court staff. 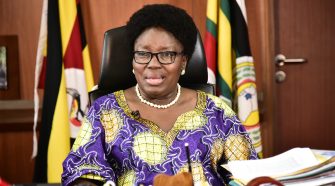