The President and Commander-in-Chief of Uganda’s Armed Forces, Gen Yoweri Kaguta Museveni, has made promotions in the Uganda Peoples’ Defence Forces (UPDF).

The promotions have been confirmed by the Defence Spokesperson, Brig Gen Richard Karemire. He told SoftPower News that Maj Gen Abel Kandiho was promoted on account of his meritorious performance.

“Maj Gen Kandiho has been promoted because of meritorious performance. Because of its strategic coverage and size, the Chieftaincy of Military Intelligence has been elevated to a 2-star command,” Brig Karemire told SoftPower News.

Kandiho is widely credited by Ugandans for leading his team in successfully fighting criminality including dismantling terrorist cells sponsored by foreign states.

Those promoted to the rank of Brigadier General include; Chris Ddamulira, Bosco Omure Okwir, the Regional Coordinator of OWC in Lira; Rebecca Mpagi; Vincent Okello; Geoffrey Kigozi, the OWC Liason Officer at NAADS, Hassan Kimbowa, Eugene Ssebugwawo and Bonny Wolimbwa among others. 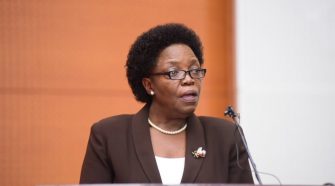