China has promised to avail Africa with USD 60 billion to support the continent’s development financing. The commitment, majority (USD 20bn) of which will be in credit lines was announced by Chinese President, President Xi Jinping on Monday during the China-Africa cooperation forum.

This figure also includes $15 billion in aid and interest-free loans, $10 billion for “development financing” and $5 billion to buy imports from Africa.

Xi Jinping said that the financial support from China towards Africa comes with no strings attached and is aimed at mutual benefits. He said it was a way to advance its win-win policy in the continent.

“China follows the principle of giving more and taking less, giving before taking and giving without asking for return,” Xi said in his keynote address at the China – Africa forum in Beijing.

He said China will engage Chinese companies to undertake investments on the continent to a tune of at least USD 10 billion over the next three years.

But the Chinese leader cautioned African leaders against using the financing for what he termed as “vanity projects”.

He said the money was targeted at “major bottlenecks to development.”

“China-Africa cooperation must give Chinese and African people tangible benefits and successes that can be seen, that can be felt,” he said.

It is increasingly expanding and entrenching itself on the African continent, largely through availing loan financing which many observers say could entramp poor economies unless they adjust their economic policies and cut down on wasteful expenditure.

In Uganda, Chinese products remain prominent on the list of imports and so does the Chinese firms operating in the country, especially on mega infrastructure projects.

Notable among the projects undertaken by Chinese firms is the newly commissioned 51.4km Kampala-Entebbe expressway, the first ever expressway in Uganda whose cost was Shs 1.7 trillion.

Chinese contractors are also involved in the expansion of Entebbe airport as well as the construction of Karuma and Isimba hydropower dams.

Financing for the first phase (273 kms) of the standard gauge railway, to connect Kampala to Kenya through Malaba will be financed by the China Export–Import (EXIM) Bank.

Economic analysts say that for Uganda which is already struggling with growing external debt from China, there must be a shift in investment strategy to prioritize basics for production and lifting household incomes so as to create a market with purchasing power.

Economists like Fred Muhumuza say that at Uganda’s level of development, priority must not be borrowing to build expressways which the advanced economies like China built after growing their human capital.

He further proposes that credit lines availed by China be used to capitalize the Uganda Development Bank (UDB) so as to lower the cost of credit to about 12% so that ordinary Ugandans can borrow to do business. 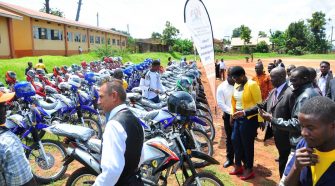 Govt Hands Over Motorcycles for Monitoring of Youth and Women Programs