The Chinese embassy in Uganda has refuted reports carried in an article by an American newspaper, Wall Street Journal, which alleged that Chinese technology giant, Huawei, helped the Ugandan government to hack into Bobi Wine’s online conversations.

The WSJ in its article said that government with the help of Huawei was listening in WhatsApp, and Skype conversations of opposition politician also legislator for Kyadondo East, Robert Kyagulanyi (Bobi Wine).

The article published Wednesday claimed that in two separate cases in Uganda and Zambia, the Journal found that Huawei employees used its technology to aid domestic spying on behalf of governments in those countries.

Senior security officials are quoted as having stated that they worked directly with the Huawei employees in different countries. They said that technicians from Huawei have, in at least two cases, personally helped African governments to spy on their political opponents, including intercepting their encrypted communications and social media, and using cell data to track their whereabouts.

Wall Street Journal also made reference to an incident where Huawei technicians allegedly working in Uganda’s police headquarters office used spyware, to crack into the encrypted messages of Bobi Wine.

A cyber team based at the Ugandan police headquarters asked the Huawei technicians for help after failing to access the encrypted messages using the spyware, security officials allegedly told the Journal.

But a Huawei spokesperson told CNBC, the company has “never been engaged in ‘hacking’ activities.

Now, the Chinese Embassy in Kampala has dismissed the information published by WSJ terming it as “pure fake news” and “totally groundless”.

The Embassy has taken notice of an article from the Wall Street Journal on 14 August, 2019, entitled “Huawei Technicians Helped African Governments Spy on Political Opponents”, which accuses Huawei of supporting the domestic spying by the Ugandan Government and implies that the Chinese government is behind Huawei.

The WSJ article stated that by May 2017, Uganda’s police had sent dozens of officers for technical training in Beijing, accompanied by senior Huawei African-based employees and a senior Chinese embassy official, Chu Maoming.

The report adds that after three days, the group was flown from the company’s Shenzhen headquarters where Huawei executives shared details on the surveillance systems it had built across the world, according to Ugandan security officials who were present.

Chu played a crucial intermediary role in the talks, according to the article, and “he accompanied the delegation to meetings with China’s Public Security Agency where they were shown the capabilities of the Chinese surveillance state”.

However, the Chinese embassy says these claims are “utterly untrue”.

“As a matter of fact, Mr Chu Maoming had stayed in Uganda for the whole year of 2017 during which time he had never gone back to China,” a statement by the embassy reads in part.

“Such being the case, the embassy has to seriously doubt the credibility and reliability of the whole article as well as the professionalism and the basic qualifications of the journalist who are serving such a big media house as Wall Street Journal, for their ulterior motives behind the scene”.

In May this year, the U.S government banned American companies from doing business with Huawei, the world’s largest maker of telecommunications network equipment and leader in 5G technology, escalating a heated trade war between the world’s two largest economies.

U.S President, Donald Trump declared a “national emergency” that enabled him to blacklist companies seen as “an unacceptable risk to the national security of the United States”.

Huawei is accused of sharing secret user information at the request of Beijing. 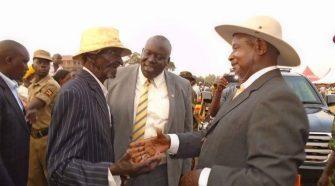