The Chinese government has donated 8 computers worth Shs 25 million to Uganda Wildlife Authority (UWA) to boost the organization’s conservation efforts.

The computers were handed over by the Deputy Ambassador of China to Uganda Chen Huixin to the Minister of Tourism, Wildlife and Antiquities Prof. Ephraim Kamuntu at the Ministry Headquarters today morning.

He observed that protecting the environment and promoting ecosystem development is a shared responsibility where everyone should play a role.

“As people of China, we know the progress you have made in the recovery of wildlife numbers, therefore this donation is our gesture of support towards UWA’s efforts in wildlife conservation in Uganda”.

He revealed that the relationship between China and Uganda is at its best saying that China has supported many government projects in Uganda and the Chinese people have invested in various areas such as manufacturing and construction in order to develop Uganda’s economy.

Chen promised to further strengthen the ties between Uganda and China through offering training to Ugandans in wildlife protection and enhancing harmonious living between the people and wildlife.

The Minister of Tourism Wildlife and Antiquities Professor Ephraim Kamuntu expressed gratitude to Chinese Embassy for handing over the computers to UWA saying that the donation will immensely help UWA in its conservation efforts.

He said that Uganda’s transformation agenda is fuelled by Chinese support revealing that Uganda’s fight for independence was inspired by the Chinese experience.

“We look to China for lessons to develop our own country; we need to learn from the Chinese so that we can get out of poverty like China did”.

He urged UWA to work closely with China describing the People’s Republic of China as a valuable friend of Uganda. He also urged UWA to embrace the use of modern technology such as drones and also helicopters which can help in monitoring the parks.

“Uganda is exceptionally endowed with natural assets and they should be conserved. We must protect these resources by training our staff, sensitization of stakeholders and involving neighbouring communities in the management of the parks”.

The UWA Executive Director Sam Mwandha expressed appreciation to the Chinese Embassy in Uganda for the donation saying that the donation comes in handy to facilitate UWA’s digitization process since the organization already has a deficit of computers.

He said that China last year offered training to UWA staff in CITES (Convention on International Trade in Endangered Species) management and that more will be going for training. He also revealed that a Chinese company is interested in investing in Murchison Falls National Park and start marketing Uganda in China. 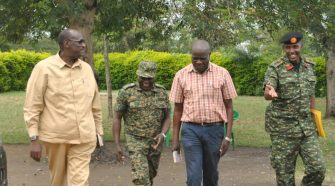